Live link to The PPJ Gazette

“the Jaksick family is attempting to control the water in the Smoke Creek Desert north of Reno, and use pipelines to bring that water south to the Winnemucca Ranch development…The plan is to share some of the 14,000 square feet of water rights with Washow County, and the county then piping their share into the Truckee Meadows for distribution through the quasi governmental agency, Truckee Meadows Water Authority”  (TMWA) 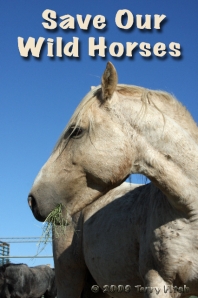 “95% of circulation water is underground. You can’t see it, but it’s there.” – geologist Graham Fogg

When we were on the June 14, 2010 public tour of the Twin Peaks Herd Management Area (HMA), the BLM said the BIG REASON they had to round-up our wild horses was because there WASN’T ENOUGH WATER. They took us by a spring east of Observation Peak, which was fenced off because it was on PRIVATE PROPERTY. The BLM said this spring fed Smoke Creek, which went south of the area. Aside from the actual spring itself, most of the creek/water runs south on public lands through the Twin Peaks Wilderness Study Area to the Smoke Creek Resevoir. The BLM took us to a cow-poop laden riparian area, showed us what looked like a puddle of water and talked more about how there was hardly any water and how all the creeks dry up in the summer.

When we asked who owned the spring/water at Smoke Creek, the BLM officials coughed up the last name of Jaksick, but none of them seemed to know Jaksick’s first name. That’s funny, because in 2008, the Eagle Lake Field Office was involved in a $6 million deal/partnership with Sam Jaksick.

An article by the Land Trust Alliance stated “BLM and the Nevada Land Conservancy have been working with landowners since 2003 for federal acquisition of the land in order to protect a wide variety of resources on the property. This is the largest and most complex SNPLMA (Southern Nevada Public Land Management Act) acquisition done to date, with more than a hundred distinct parcels with appurtenant water rights across three BLM administrative areas – the Winnemucca field office in Nevada, and the Surprise and Eagle Lake Field offices in California. The parcels, all within Nevada, are scattered throughout the Granite Range north of Gerlach, and include portions of Buffalo Hills, Twin Peaks, and Poodle Mountain Wilderness Study areas, and range from high alpine meadows to sagebrush lowlands.”

To give some background info on water in the area: In 2008, UC Davis geologist Graham Fogg, (in talking about the water around Cedarville and Surprise Valley, just north of Twin Peaks) stated that “95% of circulating water is underground. You can’t see it, but it’s there.” He also explained that “underground water comes down the Sierra Nevadas and the Carson Ridge and other hills and peaks in the area, down into underground aquifiers, then moves throughout Central and Northern California and Nevada’s underground water systems, filling aquifiers along the way and moving in mysterious patterns and along geologic gradients in ways and quantities that not even the best science has yet fully quantified…surprisingly little is known about just how much water California has in its aquifiers, let alone Nevada and Southeastern Oregon.”

Bob Fulkerson of the Progressive Leadership Alliance of Nevada added:

“…developer Sam Jaksick is one of the largest landowners in Modoc County and is in the process of developing a 12,000 home project west of Pyramid Lake in Washoe County, Nevada, called Winnemucca Ranch – a 6,000-acre spread just 30 miles north of the bustling city of Reno. The project…would require Reno to annex the area and likely pump water from Surprise Valley and other areas…He said developer Jaksick is buying up land in Modoc and in other places around California and Nevada…Jacksick’s latest project…is an egregious example of development planning – and greed – gone mad.”

A 2008 article in the Nevada Observer states, “Washoe County is…importing water from north eastern California by way of a pipeline from the Honey Lake area to Lemon Valley in the north valley area of Reno”. (note: Honey Lake is 2 miles from the Twin Peaks HMA) “The City of Reno has been working on plans to extend the city limits some 30 miles to the north and allow for development of an area known as the Winnemucca Ranch, which sits just west of Pyramid Lake. The plans have been modified to a degree, which would allow the development company to build out, including some infrastructure, then join the city…”

“the Jaksick family is attempting to control the water in the Smoke Creek Desert north of Reno, and use pipelines to bring that water south to the Winnemucca Ranch development…The plan is to share some of the 14,000 square feet of water rights with Washow County, and the county then piping their share into the Truckee Meadows for distribution through the quasi governmental agency, Truckee Meadows Water Authority (TMWA). Hydrologists belive there is about 16,000 square feet of water available in the Smoke Creek Desert Aquifier.”

It seems that while we were on the BLM’s public tour of woe about a lack of water in the Twin Peaks HMA last week, the local water was destined for yet another new purpose in Nevada.

Jaksick Enterprises partnered with an international timber company founded in Australia, ECO2 Forests, Inc., and is planting 3 million kiri trees on 14,000 acres near Jaksick’s Winnemucca Ranch. The kiri tree is native to China, and seems invasive to the environment in Nevada. Kiri trees need 20-60 inches of rain a year, and the Reno area only gets 7-8 inches a year. The kiri tree strips carbon dioxide from the air and lets Jaksick Enterprises suck in money from the proposed carbon-credit market. As a matter of fact, big money. According to ECO2 Forest’s website, projected revenue for each harvest cycle (7 years) is $225 million for the lumber and $12 million for carbon credit sales. http://m.rgj.com/detail.jsp?key=326697&rc=lo&full=1 and http://www.eco2forests.com/smoke-creek.html

The Twin Peaks Herd Management Area is land that’s supposed to be devoted principally to the welfare of the wild horses under the Wild Free-Roaming Horses and Burro Act of 1971. The BLM, in whatever deal they cut with Jaksick or others, should’ve made sure our wild horses had enough water to drink.

As an aside, Sam Jaksick, an avid hunter, was charged with using a helicopter to harass bighorn sheep in violation of the Airborne Hunting Act. Jaksick may own land where the BLM is putting the trap sites for the wild horse gathers. This is a coincidence, since Dave Cattoor of Cattoor Livestock Roundup Company, which the BLM has contracted to conduct the wild horse gathers, was convicted for aiding and abetting in the use of aircraft to hunt wild horses.

If you would like to find out more about our wild horses or updates on the gathers, an excellent website is www.thecloudfoundation.org