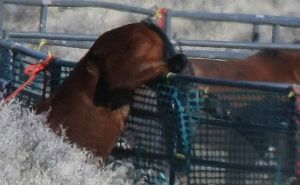 As the mean Antelope Complex wild horse stampede is allowed to continue the number of equine victims continues to mount. Be it shattered bands as stallions escape and their families are taken or the large number of full term pregnant mares being harassed and hauled away, Obama’s wild horse agency (BLM) relentlessly stalks, hunts and inhumanely removes the natural natives of Northern Nevada’s Antelope complex never to know freedom again.

Yesterday, a stallion attempted to escape the claustrophobic and incorrectly designed holding pen only to be hung upside down by his hindquarters for an extended period of time. Although contract wranglers rushed to free the imperiled horse their initial humane actions were quickly countered by their lack of care as they pulled and tugged the possibly injured horse by the neck and promptly released him back into the pen with rope still attached as they prepared to satisfy their greed by loading yet another group of incoming horses into the very same pen.

After the pen is loaded several stallions begin to fight with entangled horse caught in the middle with the rope pulling him to and fro. It is an ugly fight but time does not permit the uploading of the video this night. The horse is later separated with two others and put into a trailer where observers could not monitor his condition for several hours. The final disposition of this horse is unknown at this time.

The embedded videos document this occurrence but were taken at maximum telephoto distance without the stability of a tripod. These raw videos are unedited and contain the dialog between Terry Fitch and her husband R.T. operating the video camera who could not see into the view finder due to the glare of the sun. Voices in the background are those of BLM employees.

It is highly recommended that you boost these videos to “full screen” so that you can clearly see the events.

“If you are concerned and/or interested in seeing an end to this inhumanity continue to “turn the volume up” by faxing your elected representatives and ask them to put an end to this insanity. Congressmen, Senators, the President…they all need to hear and hear the message in a big way. Crank it up and shut it down, NOW!” ~ R.T.