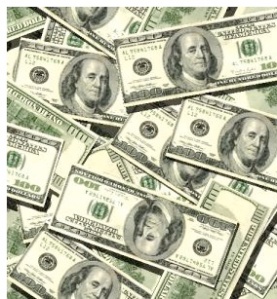 Sometimes, when exploring for the Perfect Morsel with the hope that it that might bring about actual changes in the myriad issues surrounding wild horse and burro policies, we find ourselves in some unexpected places, and discover that even people & organizations of opposing beliefs can have a common ground.

The Cato Institute is portrayed as a “Libertarian think tank,” an organization which was founded in 1974 by, among others, Charles Koch.

The Institute’s website states, “The mission of the Cato Institute is to originate, disseminate, and increase understanding of public policies based on the principles of individual liberty, limited government, free markets, and peace.”  And “…offers guidelines on Federal programs that should be terminated, transferred to states or privatized…”

A few years ago, Chris Edwards, a budget expert and Director of Tax Policy Studies for the Cato Institute and other contributors wrote a book entitled “Downsizing the Federal Government.”

Even with legitimate concerns regarding proposals to grant states management over wild horses and burros, there are other areas upon which we might find ourselves in agreement with the book’s authors.  Specifically, addressing those agencies charged with management of wild horses and burros and other wildlife (although not all are compelled to adhere to the tenets of Public Law 92-195,’The Wild Horse and Burro Act’).

It’s perplexing to wild equine defenders as to why Public opposition to current ‘management’ of wild equines, compelling independent studies – even Congressional inquiry –almost unilaterally fail to make a dent in this Program which administers to wild horses and burros, now long gone off its original course.

Unquestionably, the offshoot of a ponderous and impossibly huge vehicle that consumes resources everywhere it goes and generally, gives very little back.

Keep in mind – this source matter, like the unauthorized works of research for wild horses and burros – was neither commissioned nor paid for by a Federal agency, so it might be considered somewhat… accusatory.

Below are a few excerpts from the book.

“The fundamental problem in managing these needs today is one of poorly designed incentives. Rather than give the BLM a clear mission that produces rewards when the agency accomplishes the mission, Congress governs the agency with a hodgepodge of laws, funding mechanisms, and expectations.  Rather than trying to price the use of federal resources to encourage efficiency, the BLM often subsidizes resource use.

BLM—and Interior in general—often bases prices for the use of its resources on political, historical, and administrative factors, not on market valuations.  As such, the prices and fees for grazing land, mineral resources, and timber are often set artificially low.”

“BLM’s policies create bad incentives not just for the users of federal lands, but also for BLM managers.  The rules for the share of fees that can be retained by the BLM, for example, are not consistent.  At various times in recent history, the BLM has been allowed to keep 25 percent of timber revenues collected in western Oregon but none elsewhere.  It can keep 50 percent of grazing revenues, but no recreation revenues, except in a few locations where it can keep 100 percent.  The BLM is allowed to charge 100 percent of fair market value for coal, oil, gas, and timber, but the fees it can charge for hardrock minerals (other than coal), grazing, and recreation are regulated by Congress and are usually well below market value.  Following its incentives, the agency tends to focus its attention on resources that produce revenues it is allowed to keep but neglects other resources.

A related problem is that special interest groups have persuaded Congress to give them a share of BLM revenues, and they lobby hard to keep those privileges.  For example, in most places counties receive 5 percent of BLM revenues, but in western Oregon they have historically received 50 percent of BLM timber revenues.  When BLM timber sales declined by nearly 90 percent in the early 1990s (partly in response to the listing of the northern spotted owl as a threatened species), the western Oregon counties persuaded Congress to nonetheless maintain payments at high levels.  The result is that today the BLM collects about $20 million a year from timber sales in western Oregon, but Congress pays about $100 million a year to manage those forests, plus another $100 million a year to the counties in the region.”

The National Park Service (The biggest spender of Interior’s budget- $3.2B for FY 2014):

“Note that user fees collected on a few of the national parks cover all or nearly all of the costs of operating those parks.  But the NPS makes no general effort to cover its costs, and it has no incentive to try.  Instead, the NPS regards user fees solely as a way to augment its budget on top of the taxpayer funding that is appropriated by Congress. “

“An interesting historical episode at the NPS led to the coining of the phrase “Washington Monument strategy.”  The phrase describes the bureaucratic tactic of responding to proposals for budget restraint by cutting the most popular programs first.  It was coined when the NPS shut down the elevator to the Washington Monument in 1969 in a successful effort to persuade Congress to restore budget cuts.”

“In his 1987 book, Playing God in Yellowstone, Alston Chase described how park rangers were effectively police officers, not scientists or naturalists.  The training that allowed employees to advance most rapidly within the agency was police science, not history or natural sciences.  The agency’s police culture has manifested itself in many incidents:

“The FWS’s most controversial program is enforcement of the Endangered Species Act.  This law has a noble goal but an ill-considered methodology that puts most of the cost of endangered species recovery on the owners of the land the species happens to live on.  The FWS lists more than 1,300 domestic species as threatened or endangered, but its endangered species budget of less than $200 million is barely enough to monitor these populations.  A substantial share of that amount is dedicated to “recovery,” which really means writing recovery plans, not actually doing anything to recover species.  Actual recovery efforts are left to other entities, which the FWS calls “partners and stakeholders.”  But many of the “partners” are unwilling private landowners and unenthusiastic public land managers.”

“The FWS’s wildlife refuges are less controversial.  Most of those located in the lower 48 states are marshes and other habitats for migratory bird species.  The agency could do much more to generate revenues to make these refuges financially self-sufficient, but it has little incentive to do so since Congress gives it taxpayer funds to run them.”

(Under “The Department of Agriculture”)

(Note: In conjunction with the Bureau of Land Management, the Forest Service manages 37 wild horse and burro ‘territories’;  according to listings on the FS website, some populations are extremely small or non-existent. Information is spotty and poorly represented.  The web pages on wild horses and burros have not been updated in over a year.

Often, BLM Environmental Assessments to remove wild equines will include some mention regarding ‘wild fires’ as an adjunct – an enhancement – in documents issued for wild equine removals.)

“Downsizing the Federal Government” outlines why the Forest Service should be reformed, though the author’s rationale targets the Timber Program and the intense focus on ‘fire activities’:

“…in 2000, when a fire burned more than a billion dollars’ worth of homes in Los Alamos, New Mexico, Congress responded by giving the Forest Service a whopping 38 percent increase in its 2001 budget…”

“Fire expenditures have grown from about 10 percent of the Forest Service budget in the early 1990s to more than 40 percent today.”

“…much of the spending on fire activities is as questionable as the Forest Service’s earlier timber programs.  National forest fire problems are not as bad as the Forest Service claims; hazardous fuels are only a major issue on about 15 percent of federal lands in the West. “

Based on the points outlined, we might consider – what “incentives” drive the management of wild horses and burros?  Could a reasonable allocation of funds applied to thoroughly monitoring these animals on the ground bring the soaring cost of the Program back to Earth?  Could in-house resource use – for example, hay grown by BLM for short term holding facilities or the use of BLM helicopters/pilots – mitigate contractor costs and allow field offices to become more self-sufficient?  Are plans for beneficial changes in wild equine management held in abeyance to remain perpetually in the “planning stages?”

And perhaps, most important – is the Wild Horse and Burro Program truly in jeopardy or simply a casualty of “… political, historical, and administrative factors…?”

The eBook can be read or downloaded here: http://www.cato.org/downsizing-government