Is Donkey Skin the New Ivory?

by Alixandra Caole Vila as published at Nature World News

African Donkeys are Being Slaughtered to Extinction

While China’s taste for elephant ivories have died down, it seems like their fondness has shifted to Donkey skin this time. 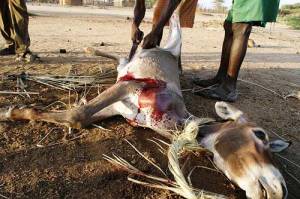 According to the National Council of Societies for the Prevention of Cruelty Against Animals (NSPCA), South African donkeys are being slaughtered to extinction for the gelatin found in their skin and their meat.

While the donkey-hide gelatin has no commercial value in Africa, it is a popular ingredient used to create Chinese medicine to treat anemia and menopause-linked ailments. The gelatin, called Ejiao in Chinese, reportedly stops bleeding and strengthens the blood.

“[Ejiao] is quite a popular ingredient in China that people may self-prescribe,” Chinese medicine expert Mazin Al-Khafaji told The Independent. “It’s a hard gel, made from donkey hide, which is then dissolved in hot water or alcohol. It’s also used topically in a cream, for leg ulcers for instance.”

CNN noted that because donkey skin is highly sought-after in China, the donkey population went down from 11 million to six million in the past 20 years. Approximately 80,000 animals had been sold in the first nine months of 2016. While the demand had delivered a valuable stream of foreign currency, it has placed small-scale farmers in a difficult situation.

China File said that because the price of donkeys increased, rural communities who depend on the animals for livelihood are suffering.

Speaking with Science Times, a donkey owner in Mogosani village named Ikgopeleng Tsietsoane shared that currently, the price of a donkey is 2,000 rand. It used to be only 400 rands ($30 or 29 euros).

At present, a number of African countries, including Niger and Burkina Faso, have banned China from buying their donkeys to save the docile beast’s population and the livelihood of locals. However, smuggling still persists in areas where it is considered illegal to do so…(CONTINUED)