by Zachary Treu as published at PBS.org

“Without horse fighting, it wouldn’t feel like a new year,”

In several small villages throughout the southern regions of China, a grisly 500-year-old tradition kicked off the Chinese New Year last week.

According to a report from l’Agence France-Presse, members of the Miao ethnic group have been holding horse fighting competitions for more than five centuries. These tournaments, which offer prizes of up to 10,000 yuan (around $1,650), are held year-round, but are occurring more frequently as the Year of the Horse begins.

“We used to hold horse fights just once a year, but now we do it more often. Because this is the Year of the Horse, we are even more happy,” Zhou Tingyi, who presided over the fights in Tiantou — a village in the Guangxi region — said this weekend. 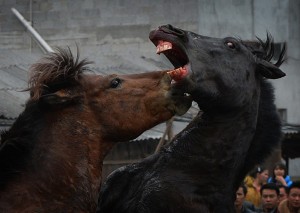 he horses are pushed to kick and bite each other by the presence of a female. Photo by Mark Ralston/AFP/Getty Images.

Two male horses are encouraged to fight over a mare, which, according to the AFP, is “kept metres away from the clashing pairs by a villager armed with little more than a stick.”

The winning stallion is the one that “successfully defends its position close to the female.”

At Tiantou’s New Year competition — which also features costumes, dances and other forms of pageantry — barriers don’t separate attending villagers and tourists from the clashing beasts.

“Without horse fighting, it wouldn’t feel like a new year,” said trainer Pan Jianming, whose horse Little Black won a competition this weekend.

Animals Asia — a Hong Kong-based foundation — has condemned the practice, calling the fighting a “horrific spectacle” that causes “abuse and suffering to animals in the name of entertainment.”