by Mark Price, The Charlotte Observer The history of those wild horses roaming North Carolina’s Outer Banks has long been shrouded in mystery, with most historians believing they descend from mustangs brought by Spanish settlers 500 years ago. An exact origin may never be proven, but an ambitious […]

Source: Wavy.com Corolla Wild Horse Fund recently had an incident where a distressed foal separated from his mother and landed in a potentially dangerous situation.  On Friday afternoon, officials with the horse sanctuary and law enforcement responded to a call about a distraught foal. The foal, Sebastian, was […] 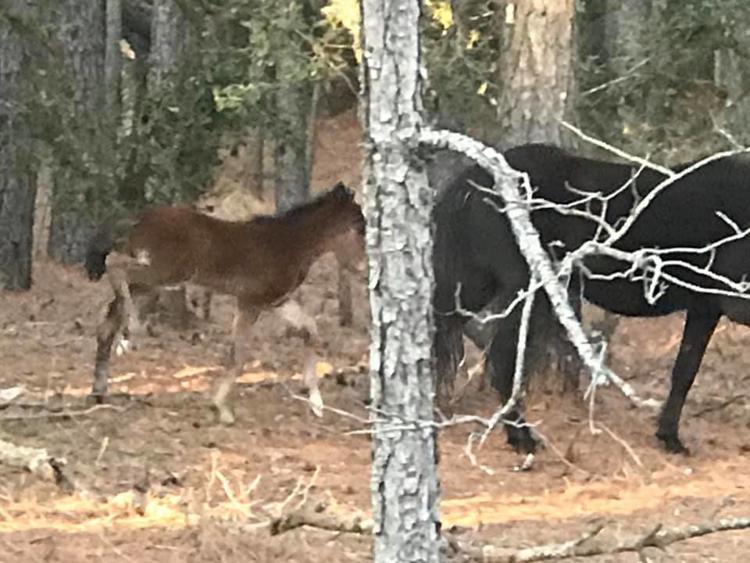 by Kari Pugh as published on InsideNoVa.com “The Outer Banks’ storied wild horses have a new addition” A new foal was spotted late last week back in the woods and marsh in Carova, North Carolina, on the Currituck Outer Banks, according to the Corolla Wild Horse Fund, which […]

By Bailey Aldridge as published on The News Observer A horse that roamed the beach for decades on North Carolina’s Outer Banks died Friday. Amadeo, a 40-year-old blind mustang, ran wild on the Outer Banks for more than 20 years and was “king of the beach,” the Corolla […]

By Mark Price as published on The News Observer The Outer Banks hold countless dangers for unsuspecting visitors, from sharks to rattlesnakes, but none compares to the wild horses in February It’s their mating season, a time when seasoned stallions are known to stand on two legs, throwing […]

by Kareena Koirala as published on AmoMama.com Hurricane Dorian struck with tragic devastation. However, the majestic breed of wild horses living in North Carolina’s Outer Banks used their natural defenses against the storm. According to Corolla Wild Horse Fund, which looks after the herd of wild horses in […]

Outer Banks’ wild horses know how to survive a hurricane

by Meilin Tompkins as published on WCNC.com The wild horses are actually better equipped to handle a hurricane than most humans living on the Outer Banks. COROLLA, N.C. — Many people have been wondering if the Outer Banks’ Wild Horses will evacuate when Hurricane Dorian moves past the […]

Source: WITN.com “A veterinarian determined that his leg couldn’t be treated …” COROLLA, N.C. (WITN) – A wild horse on the Outer Banks had to be put down late last week. The Corolla Wild Horse Fund posted pictures to its Facebook page of Joaquin, who was a young stallion […]

by Adriana De Alba as published on 13newsnow.com The Currituck County Sheriff says people continue to approach and feed the horses every day. Deputies will begin strictly enforcing laws. CURRITUCK COUNTY, N.C. — They’ve roamed the beaches of Currituck for 500 years, but their numbers are dwindling. As […]