By George Knapp , Matt Adams as broadcast on LasVegasNOW.com “Not much need for commentary, here, as George lays it out on the line pretty crisp and clear, ‘The BLM is a corrupt, lying, thieving federal agency that puts not only our wild equines at risk but private […]

BLM backs down to cattle activists

A sheriffs office is investigating if some of the actions in the Bureau of Land Management’s wild horse roundup are animal abuse. This investigation started the same day we aired a video– showing a helicopter pilot flying close to a horse in White Pine County. Brooke Boone has been working hard on this story… White Pine County Sheriff Dan Watts say his office received this video– shortly after it was taken on January 28th. After seeing the video, they began investigating if Sun J Livestock– the company hired by the Bureau of Land Management to round up horses in northern Nevada was committing animal cruelty.

WASHINGTON, D.C. July 27, 2010 – The American Wild Horse Preservation Campaign (AWHPC), which is supported by a coalition of more than 40 public interest, historic preservation and horse advocacy organizations, today supplemented the ongoing Department of Interior Office of Inspector General (OIG) review of the Bureau of Land Management (BLM)’s wild horse and burro program. AWHPC filed a complaint outlining the BLM’s negligence in the conduct of the Tuscarora roundup in northeastern Nevada.

Be Heard by BLM: Urge an End to Wild Horse Roundups

Yesterday I asked you to contact Agriculture Secretary Tom Vilsack in response to the reported plans to kill more than 150,000 geese in New York state (please do call 202-720-3631 if you haven’t done so already). Today, I need your action on another urgent concern—urging the Bureau of Land Management to stop the cruel and senseless roundups of wild horses and instead to develop humane, sustainable programs for managing the herds, such as fertility control through immunocontraception. 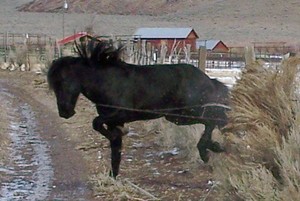 Another Helicopter Wild Horse Stampede of Death Coming to a Desert Near YOU!

Well warm up the BBQ pit and break out the beer because the ole BLM is about to fire off a rerun of the death and destruction and hundreds of native wild horses are now doomed.

ELKO — The U.S. Bureau of Land Management Elko District’s Tuscarora Field Office has released an environmental assessment on its plans to remove about 1,000 horses from the Owyhee, Rock Creek and Little Humboldt herd management areas.