By Tim Ghianni of Reuters 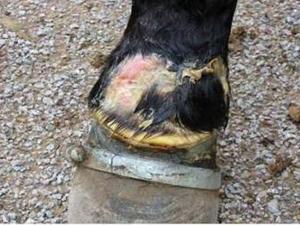 Former Tennessee walking horse hall of fame trainer Jackie McConnell was fined $75,000 and sentenced to three years probation in federal court on Tuesday for using a banned and abusive practice on show horses that was caught on video.

McConnell faced 52 counts of transporting and showing abused horses and had pleaded guilty in May to a single charge of animal cruelty in an agreement with prosecutors that called for probation and a fine.

U.S. District Judge Harry Mattice Jr. accepted McConnell’s plea, imposing the fine, which could have been up to $250,000, and probation at a federal court hearing in Chattanooga on Tuesday. McConnell faced up to five years in prison if the agreement had not been accepted.

McConnell was banned for life from the Tennessee Walking Horse organization’s biggest event and stricken from its hall of fame along with written and photographic mentions after ABC News showed the video in May of him abusing horses.

The federal charges stemmed from a banned practice called “soring” in which the front legs of walking horses, known for their high-stepping gait, are slathered with caustic chemicals to induce pain that causes them to kick even higher.

An animal rights activist working undercover in a horse barn secretly recorded McConnell and some colleagues abusing horses in March and April 2011. The video was used as a basis for the prosecution and shown by ABC more than a year later in May 2012.

The video showed horses being beaten with wooden sticks and poked with electric cattle prods. The horses’ ankles were covered with caustic chemicals and then wrapped with plastic to increase their pain.

Keith Dane, director of equine protection for the Humane Society of the United States, said he wanted a tougher sentence but that McConnell’s case still would send a message that soring would not be tolerated.

“It was our hope that McConnell would do prison time for these terrible crimes but there are gaps in the federal law that need to be strengthened,” Dane said.

Two other men pleaded guilty to misdemeanor charges in the case and were sentenced to probation as well.