By LEE JUILLERAT For the Capital Press

“Hyde lived a full life, not only as a rancher and author, but also as a naturalist, environmentalist, cowboy historian, rodeo photographer and rodeo clown…” 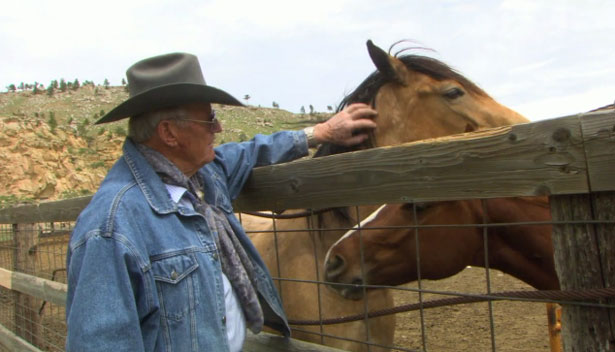 KLAMATH FALLS, Ore. — Dayton O. “Hawk” Hyde hadn’t lived in the Klamath Basin for more than 30 years, but he returned to his family’s Yamsi Ranch shortly before Thanksgiving.

It was his last visit. Hyde, 93, died at Yamsi near Chiloquin surrounded by family members on Dec. 22. At the family’s request, no services are planned.

“It was good he could make it home,” says his son, John, who manages the ranch, which runs red Angus cattle and offers trophy trout fishing.

Hyde had made only infrequent Klamath Basin visits since leaving Yamsi in 1988 to establish the 11,000-acre Black Hills Wild Horse Sanctuary between Hot Springs and Edgemont, S.D.

Born in 1925 in Marquette, Mich., Hyde was 13 years old when he caught a freight train to Oregon, lured to Yamsi, located near the headwaters of the Williamson River, by his uncle, Buck Williams, and his tales of wild horses, trout caught with a wash pan and life in the wild West.

It was at Yamsi, the 6,000-acre ranch he bought from Williams in the early 1950s, where Hyde wrote books that help define the Klamath Basin. His first, “Sandy: The True Story of a Sandhill Crane,” published in 1968, tells how he nurtured sandhill cranes. “Yamsi: A Year in the Life of a Wilderness Ranch,” published in 1971, described a year of life at the ranch, with a focus on Hyde’s connection to the natural world and the environment.

“The Last Free Man,” which Hyde said was his favorite book during a 2009 interview, was published in 1973. Another book with Klamath connections is “Don Coyote,” 1986, which describes his relationship with coyotes at Yamsi. In the autobiographical “The Pastures of Beyond: An Old Cowboy Looks Back at the Old West,” published in 2005, Hyde recounted his early life and relationships with people in the Klamath Basin.

After moving to South Dakota in 1988, his focus shifted to managing the preserve, although he continued to write both fiction and non-fiction in a style described as earthy with “a lyrical appreciation of the natural world and a sense of the absurd.” During a 2009 Klamath Basin visit, Hyde said of the physical and emotional tug of Yamsi and South Dakota, “It’s like being in love with two beautiful women and trying to decide where to spend the night.”

Hyde lived a full life, not only as a rancher and author, but also as a naturalist, environmentalist, cowboy historian, rodeo photographer and rodeo clown. He appeared on several television shows, including “Dick Cavett,” “Good Morning America” and “National Geographic Today.” People magazine described him as “an amazing American.”

Life had been interrupted during World War II, when he served with Patton’s Third Army and swam ashore at Normandy on D Day. While stationed in France after the allied victory in Europe, he staged rodeos in the Roman amphitheater at Arles.

Over the years, Hyde was featured in Life and Parade magazines and received many awards. Among his many honors, he was named Conservationist of the Year by three different Oregon governors, named the National Cattleman’s Association Environmentalist of the Year; and his book “Don Coyote” was named one of the 10 best books of the 1980s by the American Library Association.

Hyde was featured in a documentary film, “Running Wild: The Life of Dayton O. Hyde.” Suzanne Mitchell, the film’s producer/director, said she was captivated by Hyde’s passion, explaining, “I had to make a film about this incredible man who has handed his heart over to the West and accomplished so much through sheer will.”

Of leaving Yamsi he said, “I love the ranch and the lake and the things I’ve built there,” noting that as his family grew up and became more involved in ranch operations, “They didn’t need me. I needed new stories to write about and think about. It was time for a change.”

Hyde termed creating the horse sanctuary, where 500 wild horses rescued from “lives of misery” live on protected land as “the hardest work I’ve ever done.” His advocacy led to, “All The Wild Horses: Preserving the Spirit and Beauty of the World’s Wild Horses,” a book done with photographers Rita and Charles Summers.

The sanctuary, through the Institute of Range and the American Mustang, will continue operations under the leadership of Susan Watt. Information is available at www.IRAM@qwtc.net.

In the Klamath Basin, Hyde’s legacy are the Yamsi Ranch and his books, including “Pastures of Beyond.” In discussing “Pastures” he said, “I think I wrote it with great love. There isn’t anything in there that isn’t true. Some of them had to be watered down. I had some great some stories to draw from.”

Hyde said the book represented his desire to write stories that might otherwise have been forgotten. “One reason I left (Yamsi) was I needed new grist for my mill. It turned out I went back there and wrote about Klamath from a new perspective. The book gave me a chance to honor the old-timers.”

Dayton O. “Hawk” Hyde was a prolific author, especially during his years at the Yamsi Ranch near Chiloquin. Among his best known are two books that describe life at Yamsi, “Sandy,” 1968 and reprinted in 2000, and “Yamsi,” 1971, reprinted in 1996.

Most are out of print but some of Hyde’s later books are available through the website at http://www.wildmustangs.com.