The herd has apparently adapted to an annual hunt by delaying its migration, but that’s causing new conflicts with neighbors. 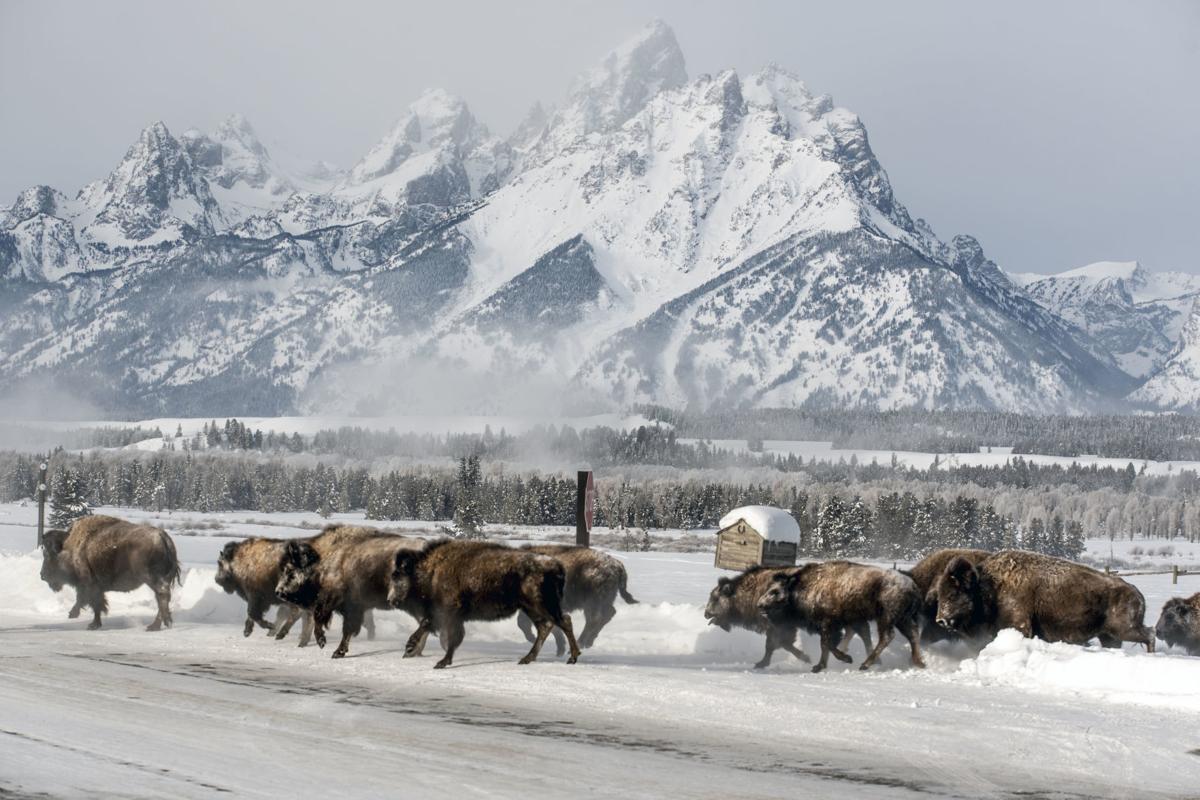 Near midnight on Sue Pepe’s long commute home to Buffalo Valley, four bison appeared near the S-curves just up the highway from the Snake River Overlook.

She slowed significantly, but the small group of stout shaggy animals panicked anyway.

“I don’t know if they slipped or I spooked them,” Pepe recalled, “but instead of crossing the road they went charging north in the southbound lane.”

What happened next is implausible and traumatic. The four bison that were spooked running downhill ahead of Pepe’s crawling Subaru Forester evidently spooked another, larger bison herd of perhaps 30 animals. They bolted her way, and fast.

“The road was just full of bison running south,” Pepe said. “I stopped my car, and I thought, ‘please God, go around me.’ I just had this terrifying moment where I knew they weren’t going to stop.”

They didn’t. For whatever reason, the brown beasts running down the road either didn’t see her vehicle or chose not to divert course. In an ensuing 10-second-long stampede, animals pounded into her windshield and hood, and glanced off the sides of her stationary station wagon.

Pepe was balled up in her driver’s seat, fearing for her life. 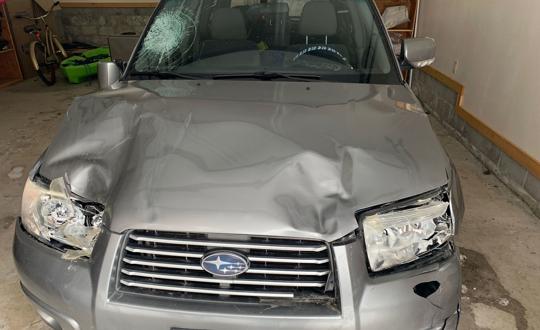 Pepe’s bison pummeling is remarkable and unlikely because she wasn’t moving, but the other outlier is when and where she ran into a herd. She was headed home from her job at C-Bar-V Ranch on Jan. 30, weeks after the Jackson Bison Herd has historically pushed south towards traditional winter range on the National Elk Refuge.

There’s no clear scientific explanation for the delayed migration, but wildlife managers have closely documented that it’s happening. One hypothesis is that the herd has learned to stick tight to Grand Teton National Park — a no-go zone for hunters — to avoid a hunting season that runs well into the winter on the refuge and Bridger-Teton National Forest.

“It has just continually gotten later and later in the season,” Wyoming Game and Fish Department Regional Disease Biologist Ben Wise said of the migration. “You can almost forecast what day they’ll be there” on the refuge.

Going back a dozen years, Game and Fish records show the first bison movements south onto the Elk Refuge came in September and October. In the 2012 through 2016 timespan, a December arrival was much more likely. For the last two years the migration has been put off until the middle of January, at the earliest.

Jackson Hole’s wild bison are now essentially arriving into the area where they can be hunted when the hunt is ending. Because of state regulations designed to prevent humans from contracting brucellosis, the season can extend no later than it does today.

Game and Fish is grappling with how to adjust the hunt, which has become decidedly more difficult. The winter of 2016-17, Jackson Hole hunters successfully downed 274 bison, with an overall success rate of 98 percent. This past season the take was 91, and cows and calves, safeguarded by the park, were particularly hard to hunt. Just 16 of 75 cow-calf license holders — 21 percent — filled their freezers.

“In our regulations, we plan to let people know that this is not easy,” Game and Fish spokesman Mark Gocke said. “We’re just going to be very clear up front, and give them a fair picture of what they’re getting into.”

Part of the reason bison hunting has become harder is because early migrants have been hunted out of existence.

“A big change has been that there used to be a north bison herd and a substantial southern herd that would summer out around Antelope Flats,” Game and Fish Wildlife Biologist Aly Courtemanch said. “They’ve been harvested.”

Modern bison hunting in Jackson Hole started in 2007, after a court-ordered ban on the pursuit lapsed when federal agencies completed a plan to manage the uniquely feedground-reliant Jackson Hole bison and elk herds. Although grizzlies, wolves and cougars roam the valley, predation is a non-factor in bison population dynamics and numbers rose to a peak of around 1,200 animals with no hunting. The herd goal, however, was just 500, and aggressive hunting seasons ensued that brought the herd to its objective, geared toward maintaining a balance with finite winter range.

The Antelope Flats bison — the early arrivers on the refuge — got the short end.

Deep snow usually nudges the animals toward greener pastures farther south. Last year’s low-snow year was an aberration at low elevations, and the herd didn’t cross the Gros Ventre River onto the refuge until Jan. 24. This year the first real movement came on Jan. 12, though 100 or so animals stubbornly hung on in northern Jackson Hole, even past when a two-day snowstorm pummeled the valley Feb. 4 and 5.

The Moose Head Ranch has had a rough winter dealing with bison. Dozens of horses used for commercial rides in the summer spend the winter at the historic ranch surrounded by Teton park, and over hay lines more than one of the domestic animals have been bloodied by bison.

Moose Head owner Chris Davenport couldn’t be reached by the News&Guide, but he told the online news outlet WyoFile that bison have been moving on and off the horse hay line for a while, attracted to the only place that’s not covered by 5 feet of snow.

“Anytime you’ve got a concentration of stock and wild animals in a small area, especially competing for food,” Davenport said, “it’s not a good situation.”

Get along, little bison

To prevent more gorings, wardens, biologists and park rangers orchestrated a successful bison drive Friday that was designed to push the 100-head herd down the closed, plowed surface of Highway 26/89/191. By 9:30 a.m. Wyoming Game and Fish Department employees zipping around and hooting on snowmobiles had successfully nudged about 45 of the heavyset animals onto the blockaded road, and, strung out in a line, they shot straight south. The herd faked a U-turn back toward Moose Head, but then crossed in the desired direction and caught an old trail pointed toward Hedrick Pond, Lost Creek Ranch and Antelope Flats.

Waiting for them was a track that Game and Fish’s snowmachines had laid down to help the bison press south through otherwise deep snow, and over the weekend most of them obliged. By Sunday, 30 to 35 of the animals were seen trekking south of Lost Creek Ranch.

“We imagine they’re lingering in Antelope Flats,” Grand Teton wildlife chief Dave Gustine said. “They like to go to Kelly Warm Spring, they like to go to the Gros Ventre. We’re pretty happy with where they are going.”

Another 50 or so bison, however, are sticking tight to windswept Wolf Ridge in the Elk Ranch Flats area closer to the Moose Head Ranch. While bull bison often tough out the winter there, it’s unusual for the groups of cows and calves lingering there now to forgo daily rations of alfalfa pellets on the Elk Refuge.

Whether they stick around is “hard to say,” Gustine said. “We’ll probably know within the next week, after this storm system, if there’s an inkling for some of those animals to move south.”

One factor that could force the park’s hand is if the herd again gets testy with Moose Head Ranch’s horses. Although the Park Service generally promotes letting natural processes rule the day, in this instance stemming the conflict is “at the top of the list,” Gustine said.

“The facilitated movement is just to help the bison get where they want to go, and reduce the potential for conflict and make sure we don’t have bison standing around on the roadways,” Gustine said. “People need to be really cautious on the road there, particularly at night.”

It took Pepe a week to muster up the courage to brave the late-night Highway 89 commute after the bison stampede, which left her Forester totaled, at least by her insurance company’s standards.

“I had someone on the phone with me the whole time,” she recalled of her first time back at the S-curves. “I know it sounds dramatic, but I still think back to the moment of seeing all their eyes and their horns and their massive bodies. I’m just having trouble getting that out of my brain.”

Even so, Pepe knows there were spectacularly low odds of enduring a stationary bison wreck — let alone any likelihood that it’ll happen again. It was a classic “wrong time, wrong place” mishap, she said.

“I do think it’s ironic that I live on Buffalo Run Road in Buffalo Valley,” she said.