By Neil Vigdor as published on The New York Times

One of the horses was sired by the Triple Crown winner American Pharoah and another by the Belmont Stakes winner Tonalist. 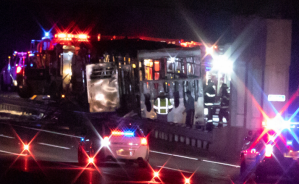 Firefighters on the scene of the accident early Sunday morning.Credit…Dennis Symons Jr.

Ten racehorses on their way from Florida to New York were killed early Sunday morning when the tractor-trailer they were riding in hit a concrete median on the New Jersey Turnpike and burst into flames, the authorities said.

The two truck drivers were hospitalized, according to the trainer of the horses, Christophe Clement, who guided Tonalist to victory in the Belmont Stakes in 2014.

“We are all devastated by the news and heartbroken — we are working to understand what happened,” Mr. Clement wrote on Twitter.

The accident happened around 3 a.m. in the northbound truck lanes of the turnpike just outside of Trenton, N.J., in East Windsor, Trooper Charles Marchan, a New Jersey State Police spokesman, wrote in an email on Sunday.

The cause was still under investigation.

Mr. Clement wrote that the trailer had been operated by Sallee Horse Vans. The company did not immediately respond to a phone message seeking comment, but its owner, Nicole Pieratt, told the racing news website BloodHorse that the drivers were treated for smoke inhalation and released from the hospital.

At least two of the horses who died had champion bloodlines and had recently raced in Florida. They were owned by West Point Thoroughbreds, which is based in Saratoga Springs, N.Y., and which confirmed their deaths.

One of the horses was Under the Oaks, a 3-year-old filly sired by American Pharoah, who in 2015 became the first horse to win the Triple Crown since Affirmed accomplished the feat in 1978. On May 30, Under the Oaks finished sixth in her debut race at Gulfstream Park in Florida.

Another who died was Hot Mist, a 3-year-old filly sired by Tonalist, the horse who denied California Chrome the Triple Crown with his Belmont Stakes win in 2014. She won her maiden race at Tampa Bay Downs on May 16.

The other dead horses were not identified.

The accident occurred less than three miles from where a Walmart tractor-trailer slammed into the back of a luxury van carrying a group that included the comedian Tracy Morgan on June 7, 2014.

Mr. Morgan suffered serious injuries in the crash, which killed James McNair, a comedian known as Jimmy Mack. The truck driver had been awake for 28 hours before the accident and was driving 20 miles per hour over the 45 m.p.h. speed limit in a work zone on the turnpike, the National Transportation Safety Board found.