By Nolan Clay as printed in the Oklahoman

Like all criminal organizations, the Zetas are motivated by money 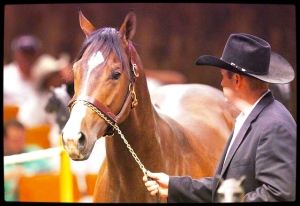 One racehorse, A Dash of Sweet Heat, sold for $1 million.

Overall, the top bidders at the three-day auction in Oklahoma City last week agreed to pay $8.74 million for quarter horses linked by the federal government to the Zetas, a violent Mexican drug cartel, records show.

Those funds will go into an escrow account until after a trial next year in Texas for nine defendants accused in an indictment of involvement in a $20 million money-laundering conspiracy.

The federal government will get the money if there are convictions.

“Like all criminal organizations, the Zetas are motivated by money,” said Robert Pitman, the U.S. attorney who is prosecuting the case in Texas.

“Identifying and taking their assets is an important way to lay an ax to the root of the tree.”

“If successful, the forfeiture of these assets will represent a major step in our efforts to interrupt the cartel’s activity within in the United States,” he said.

The key defendant awaiting trial is Jose Trevino Morales, 46, who operated Zule Farms, a horse ranch in Lexington. FBI agents in June arrested him and his wife, Zulema Trevino, at the ranch.

A federal grand jury May 30 reported he is the older brother of two leaders of the powerful Zetas.

The grand jury alleged his brothers sent millions of dollars in drug funds to him to purchase, breed, train and race quarter horses.

Both are believed to be in Mexico and are suspected of multiple murders.Almost 340 quarter horses or horse embryos linked to the alleged conspiracy were sold at the auction in Oklahoma City, records show.

The auction ran Thursday through Saturday at Heritage Place, a unique sale facility well-known in the horse industry.

The most expensive horse at the auction was A Dash of Sweet Heat. The winning bidder for the filly was breeder Julianna Hawn Holt, one of the owners of the San Antonio Spurs, records show. She had owned the horse previously.

Another 99 horses — all broodmares — were sold Sept. 11 to reduce crowding at the ranch in Lexington. The Internal Revenue Service collected about $32,175 in gross proceeds from the broodmares’ sale, records show. Those funds also are to be kept in escrow until after the trial.

The federal government still retains possession of about 45 quarter horses, according to a U.S. Justice Department news release about the auction.

Those horses are expected to be auctioned or sold at a later date.

Held out of last week’s auction were five of the more valuable horses — Tempting Dash, Mr. Piloto, Separate Fire, Dashin Follies and a colt identified only as Y516.

Prosecutors agreed to hold those horses out of any auction before trial after Jose Trevino agreed not to try to block the sale of the other horses.