Source: BY NANCY PERRY as it appears in NewsOK.com

“Horse slaughter is inhumane, no matter how or where it’s done…” 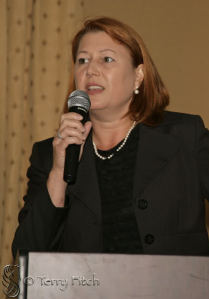 The appalling discovery that horse meat has been passed off as beef in frozen food products distributed across Europe has consumed the media in recent weeks. If the shock of learning that Europeans have been unknowingly eating horses wasn’t enough, the human health concerns associated with the consumption of toxic horse meat justifies the public outrage.

As this story unfolds in the national media, two bills making their way through the Legislature would overturn Oklahoma’s long-standing ban on the sale of horse meat for human consumption and open the door for a horse slaughter plant to set up shop in the state.

Horse slaughter is inhumane, no matter how or where it’s done. Legislators argue that horses are currently being transported to Mexico, where they are savagely put to death when their spinal cords are cut. Horse slaughter in Oklahoma would be just as savage and inherently cruel, as horses are biologically unsuited for commercial slaughter, making them difficult to stun prior to dismemberment. U.S. Department of Agriculture inspectors have discovered rampant violations and cruelty in domestic horse slaughter plants.

The USDA also notes that more than 92 percent of American horses sent to slaughter are in good condition — healthy horses that could go on to lead productive lives in loving homes. It’s a myth that only old, sick or injured horses are slaughtered. This effort is about making money while these horses suffer. A 2012 poll commissioned by the ASPCA revealed 80 percent of American voters are opposed to the slaughtering of American horses for human consumption.

Horse meat is unsafe for human consumption because horses aren’t raised for food. Dewormers, fly treatments and painkillers full of chemicals banned for human consumption are given daily to horses on the track, in the show ring and on the ranch. Oklahoma would be serving up toxic products and damaging its reputation for all other types of producers.

Passage of these bills would invite foreign-owned companies to establish slaughter plants in Oklahoma, with no regard for the local communities, which would be victim to the severe environmental and economic factors associated with slaughterhouses. Prior to being shut down in 2007, horse slaughter plants that operated in the U.S. were notorious for polluting local waterways, decreasing property values and permeating the air with a foul stench. If the past is any indicator, establishing horse slaughter plants will degrade communities and impose economic burdens on local citizens…(CONTINUED)