Source: By Francis Davis of The Montana Standard

“They’re all ages, all sizes, all colors (ALL GELDED). We’re excited to have them here.” 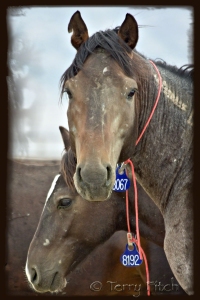 The ranch owner who manages the only long-term holding facility for wild horses in Montana breathed a sigh a relief when a Senate bill that would have required the state to develop a management plan for the horses died in committee on Tuesday.

“We’re very relieved,” Karen Rice, the owner, along with her husband, Greg Rice, of the Spanish Q Ranch, told The Montana Standard on Wednesday. “It would have added another bureaucratic process that isn’t necessary. There’s already a management plan in place. There was no reason to reinvent the wheel.”

Along with a management plan, Senate Bill 402 would have required the Montana Department of Livestock to charge a fee of $100 on each imported horse or burro.

There are 700 horses on the Spanish Q, but the original contract between the BLM and the Rices was for a total of 1,150 horses.

A retroactive clause was stripped from the bill, but the additional 450 horses would have cost the Rices an extra $45,000.

A BLM spokesman said it will be at least a year before any more horses are shipped to the 15,456-acre Spanish Q.

“We won’t be sending anymore until at least next fall (of 2014) ,” said Lili Thomas, a BLM wild horse and burro specialist. “We want to take a conservative approach and see how this works out.”

Another reason the BLM has limited the shipment of horses to 700 is that Paulette Mitchell, who leases the Rices about 3,000 acres of land, has filed a lawsuit to keep the horses off of that part of the Spanish Q.

Currently, the horses are being held only on land owned by the Rices, but the rancher said she hopes to get approval from the state to allow the wild horses onto the approximate 1,200 acres of land the Spanish Q leases from the state.

“We’ve leased land from the state for 44 years,” she said. “And we’ve had cattle on it before.”

Rice said she has been disappointed by the reaction of some of her neighbors, four of whom have filed appeals to keep the horses off the Spanish Q, but Rice has also received support from other neighbors who border her ranch.

That support includes Claudette and Creyton Hughes, who own 7L Bar Ranch and have been neighbors with the Rices since 1969, according to a notarized letter sent to the Interior Board of Land Appeals in support of the Rices.

“We have a lot of support that isn’t talked about,” she said. “(The bill) was an attempt to control what we do and it would have taken away from the life of the Montana rancher.”

Rice also said her family intends to take good care of the horses and the land, and that she sees the wild horses as a way for her to keep the ranch in the family. The Rices are receiving $1.36 per day per head. They’ve owned the ranch for over 40 years, she said.

“We take good care of our land and always have,” Rice said. “The horses do graze a little bit different than cattle, but we’ve been told that the horses have a better effect on the riparian life because they will drink and move on, unlike cattle.”

Currently, the horses are in a holding pasture as they acclimate to one another.

“They’re so exciting to watch,” Rice said. “They’re all ages, all sizes, all colors. We’re excited to have them here.”