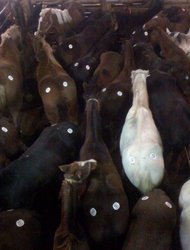 Horse slaughter is horribly abusive and cannot be made humane for horses. During transport to slaughter, horses are crowded on trucks without food, water, or rest for up to 24 hours and often sustain severe injuries or even die during transport. In fact, a Government Accounting Office report recommended banning the export of American horses for slaughter. Additionally, the slaughtering process itself is also very inhumane. Horses are skittish by nature and cannot be stunned properly. As a result, some horses are still alive during slaughter. When horse slaughter plants operated in the U.S., the USDA reported horrific cruelty, including eyeballs hanging by a thread of skin and broken bones.

The article also failed to mention that if horse slaughter returns to U.S. soil, there is a serious public health risk. Unlike animals raised for food, horses are not raised for human consumption in the U.S., and they receive hundreds of drugs over the course of their lives that can be toxic to humans if ingested. For example, Phenylbutazone (“horse aspirin”) is a drug commonly given to horses that is also a known carcinogen in humans. Worse yet, there is no system in the U.S. to track what drugs a horse has received to ensure the meat is safe for human consumption. Horse slaughter proponents have already publicly stated that they plan to market horse meat within the U.S., making this a real threat to the American public.

Horse slaughter is bad for people and bad for horses. Considering that 80 percent of the American public opposes horse slaughter, Wyoming should not become known as a state that slaughters horses. The Safeguard American Food Exports (SAFE) Act, House Resolution 1094/Senate File 541 will put an end to horse slaughter. Please call our two U.S. Senators and our U.S. Representative urging co-sponsorship of this important legislation.