“The horse slaughter industry is a predatory, inhumane enterprise…” 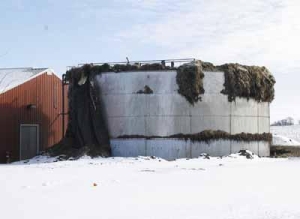 Frozen foam could be seen overflowing a water-holding tank  at Cavel International, a horse-slaughtering plant in DeKalb, before they were shut down. Chronicle file photo CURTIS CLEGG

Iowa has become ground zero in the national debate on horse slaughter, now that the USDA has cleared a horse slaughter plant to begin butchering horses here. Not only will our state earn the disdain of 80 percent of Americans who disapprove of horse slaughter, but Iowans will have a front-row seat to animal suffering and environmental degradation.

It happened in Kaufman, Texas, where horses were slaughtered until 2007. The plant flooded the local water supply with blood, the stench of dead horses permeated the air, and economies suffered. Slaughtering horses in Iowa could also tarnish our agricultural reputation-we would be contributing tainted meat to the food supply and risking the co-mingling of horsemeat in beef products, which happened in Europe. As animals raised for work and show, but not food, horses are given a variety of drugs that makes their meat unfit for human consumption.

The horse slaughter industry is a predatory, inhumane enterprise. It doesn’t ‘euthanize’ old and sick horses, but snatches up those that bring the best price per pound. It’s bad for horses, bad for communities and bad for human health. It should be outlawed, and Congress is considering legislation to do just that. Urge your legislators to support the Safeguard American Food Exports (SAFE) Act, S. 541/H.R. 1094.

Carol Griglione, Iowa state director for The Humane Society of the United States