Source: by Fran Jurga as published in Equus

“In one of the classiest moves by anyone at the top of the international horse world in a long, long time, Princess Anne adopted a horse in need…” 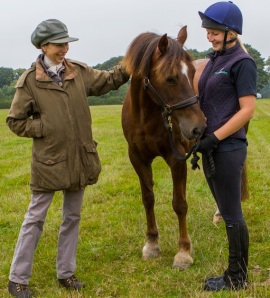 “This is the one!” A Welsh Cob mare named Annie caught the eye of Princess Anne. The mare needed a home and Princess Anne needed a riding horse. Annie now has a new home. (World Horse Welfare photo)

Imagine you’re a royal princess. You could pretty much have any horse in the world.

Now imagine you’re a royal princess who is a former Olympian. A former jump race jockey. And an enduring military officer whose duties call for ceremonial mounted occasions.

Not only could you buy any horse, but you’d be able to ride it pretty well, too. The sky’s the limit. In fact, people would probably be trying to give horses to you if you were that person.

That’s the case for Great Britain’s Princess Anne. She lives in the world of eventing and point-to-point racing and military-trained horses, all sectors of the horse world where the norm is a 16-hand (and up) Irish or warmblood horse. And she does need a new riding horse for use around her farm at Gatcombe Park in England.

Did Princess Anne go horse shopping at Westphalia in Germany or the Millstreet Show in Ireland? Did she send agents to the young horse shows or put the word out to all who worked under her last year when she headed the British delegation for the 2012 Olympics?

Far from it. In one of the classiest moves by anyone at the top of the international horse world in a long, long time, Princess Anne adopted a horse in need from the sheltered adoptee list of World Horse Welfare (WHW). The British charity–over which she happens to preside–operates several farms in Great Britain that take in horses in need, ranging from horses that have been the victims of terrible abuse and neglect to horses that have to be abandoned by owners who can no longer afford them.

In a stall inside one of the WHW barns, Princess Anne came literally eyeball-to-eyeball with a sturdy mare who is, oddly enough, named Annie, and whose legs are about half as long as the eventers and steeplechasers the Princess formerly rode. Better yet, Annie is a Welsh Cob, a native British breed. And she’s just exactly what Princess Anne, who is now 63, wants and needs…CONTINUED