By Bill Heller as published on Blood Horse

With the ban of horse slaughter for human consumption in the United States ensured for at least the next two years, equine advocates from around North America convened at the 2014 American Equine Summit in Chatham, N.Y., April 26-27 to push for a permanent ban and the elimination of exporting American horses to Canada, Mexico, and Japan for slaughter. 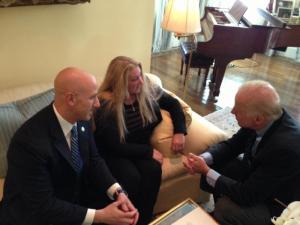 A huge, huge thank you to Victoria McCullough, FL State Senator Joe Abruzzo and
Vice President Joe Biden. No matter what you read, they drove this effort from the starting gate to the finish line.

“We’re safe, but what’s next?” asked Victoria McCullough, the owner of Chesapeake Petroleum and an international equestrian and equine activist. McCullough successfully enlisted the support of U.S. Vice President Joe Biden to remove funding for slaughterhouses in an Omnibus Bill signed into law by President Obama Jan. 17. “We will end horses going across the borders,” she said. “Horse meat will kill you.”

While horse slaughter in the U.S. ended in 2007, a proposed slaughterhouse in New Mexico nearly opened last December before the funding for mandatory meat inspectors was removed in the Omnibus Bill. Yet, according to the Equine Welfare Alliance, more than 150,000 U.S. horses were exported for slaughter in 2013 despite increasing global concern over the toxicology of horse meat. Such meat may have been contaminated by the myriad of drugs that horses—especially Thoroughbreds—are treated with, especially the analgesic phenylbutazone, known commonly as bute.

A scandal erupted in France in mid-December when authorities discovered that horses that had been used to produce anti-rabies and other serums were discovered in horsemeat sold to the public. Twenty-one people were arrested in Narbonne on Dec. 16. Two months later in Germany, another scandal erupted when horse meat was detected in frozen lasagna being sold in supermarkets. Subsequently, the European Union advised all countries to test meat.

“There is a global concern about food safety,” McCullough said. “We must disqualify equines from the food chain. We have to win the EU and Canada. Science will win for horses, and we’re on the doorstep.”

McCullough has purchased the entire lot of horses offered at the Sugar Creek, Ohio, auction, known for selling horses bound for slaughter, on three occasions and said this about the demographics of these horses that were being sold: “The majority are former racehorses. Seventy percent are Thoroughbreds. The average age is 3 to 4 years old. It’s unbelievable.”

McCullough was one of a dozen speakers at the Summit, which was held at the 140-acre Equine Advocates’ Rescue & Sanctuary, now home to 80 rescued equines in Chatham, about 120 miles northeast of New York City.

Susan Wagner started Equine Advocates, a national non-profit 501 (c)(3), in 1996 after rescuing her first horse from slaughter, Gandalf. She opened her equine rescue and sanctuary, which is now home to 85 equines, in 2004, and came up with the concept of an annual equine summit. This year people came from as far away as British Columbia, California, Montana, Texas, and South Dakota to attend the event, which was by invitation only. Asked of her goal, Wagner said, “We have to close our borders for all time.”

Jane Velez-Mitchell, of CNN’s Headline News, was the keynote speaker and spoke passionately about wild horses and carriage horses, currently a controversial topic in New York City. “I live in midtown Manhattan and I look in their eyes every day when I walk my dogs,” she said. “They are miserable. They are terrified and they don’t belong there. Tradition? Chastity belts were a tradition. Carriage horses must be eliminated.”

Leave a Reply to Manes and Tails Organization Cancel reply