By Sean Cockerham as published at newsobserver.com

Only two foals have been born this year in the herd of 101 horses. 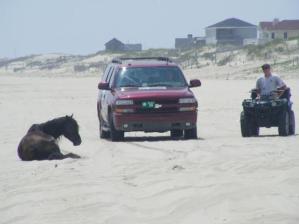 COROLLA, N.C. — Retired Washington, D.C., police Officer E.T. Smith patrolled the beach in his four-wheel-drive truck on a recent morning, keeping an eye out for wild mustangs and the drunks who like to harass them.

The horses have survived on this narrow barrier island for some 500 years, thought to be descendants of Colonial mounts that swam to shore when Spanish galleons ran aground on the shoals and sandbars of North Carolina’s Outer Banks. They’ve withstood centuries of hurricanes and nor’easters on this isolated spit of sand, marsh and woods, and became a huge draw for visitors.

But the horses now face serious threats, say those who manage the herd: a boom in McMansion-style vacation homes on this once-pristine stretch of coast and federal policies that are leaving the mustangs severely inbred and starting to suffer from genetic deformities.

“Mass interaction with people is a killer,” said Smith, after stopping to pick up a “Happy Birthday” balloon that a tourist had left behind on the beach.

The government has described the herd, some of the last remaining wild horses in the Eastern United States, as pests that compete for resources with federally protected birds. The battle over the herd on this island comes as horse advocates and the Interior Department clash nationwide. On the other side of the country, the government is rounding up wild horses in the West and confining them at the urging of cattle ranchers who say the animals deplete the range.

In North Carolina, the mustangs are left dodging tourists, developers and birth defects. Gus Cothran, an expert in equine genetics at Texas A&M University, published a DNA analysis in 2012 warning that the Corolla herd was becoming dangerously inbred.

Two of eight foals born last year had birth defects, according to the Corolla Wild Horse Fund, which manages the herd through agreement with the local and federal governments. One, with multiple fractures in its legs and fetlocks, was so severely crippled it had to be euthanized.

Two foals have been born this year in the herd of 101 horses. One had a genetic defect of severely contracted tendons that forced him to walk on the tips of his hoofs.

Medical treatment saved that horse _ which the herd managers named Vivo, a gangly dark colt with a star on his forehead whose name is Spanish for “alive” _ from being crippled and euthanized. Vivo, though, can no longer live free.

Once a wild horse is removed from the beach and exposed to domestic horses as part of veterinary treatment and recovery, there’s a risk of bringing back disease to the herd. So Vivo and his mother are confined to a facility on the mainland, near Grandy, N.C., poking their heads through a fence as visitors approach.

“We have one of the highest levels of inbreeding and lowest levels of genetic diversity of any wild herd anywhere. We are down to one maternal line, which is very dangerous,” said Karen McCalpin, the executive director of the Corolla Wild Horse Fund.

Rep. Walter Jones, R-N.C., has taken up the cause. The U.S. House of Representatives unanimously passed his bill in 2012 and 2013 to allow the herd to grow to 130 horses and to let the Corolla Wild Horse Fund bring a few horses from the Shackleford Banks, on another island at the far southern tip of the Outer Banks, in order to infuse some fresh genes into the herd.

But the bill has been opposed by the U.S. Fish and Wildlife Service, and it goes nowhere in the Senate.

The issue is that at least some horses cross into the island’s Currituck National Wildlife Refuge, although the most sensitive parts are fenced off. Flocks of endangered migratory waterfowl and nesting sea turtles use the refuge, and the government calls the horses a “nuisance.”

The Fish and Wildlife Service “considers the horses to be non-native, feral animals and not a natural component of the barrier island ecosystem,” the Currituck National Wildlife Refuge website reads. “These animals compete with native wildlife species for food and fresh water. Their activities degrade and destroy habitat, which negatively impacts native species.”

Pressure is growing for a solution, and the Southeast regional refuge manager for the Fish and Wildlife Service, David Viker, struck a conciliatory tone in a recent interview. Viker said the agency was going to work with equine geneticist Cothran on a new study to look at the potential for bringing fresh genes into the Corolla herd and how many horses the habitat could support.

He said the Fish and Wildlife Service hadn’t wanted to make horses a focus of the refuge at the expense of caring for other animals. But the agency will look for answers because the Corolla herd is “such an important icon in that part of the world,” he said…(CONTINUED)