Wild Horses Heading For Extinction: The Bureau Of Land Management And The Facts

First of all, let’s set the record straight: 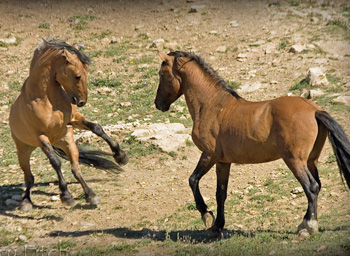 Wild horses are an American native species, according to Ross MacPhee, Ph.D., Curator of the Division of Vertebrate Zoology at the American Museum of Natural History in New York.

Given this man’s impeccable credentials and experience, his findings are beyond reproach or debate.

Here is an article by Dr. MacPhee that is crystal-clear: Wild horses are native to America.

This finding is also shared by many other highly credible scientists, including Dr. Jay F. Kirkpatrick.

Any person or any agency who says that wild horses are not native to North America is just uneducated, misinformed or intentionally lying for some reason, usually motivated by greed, mindlessly repeating hearsay or following rank-and-file orders, as is the case with some people at the Bureau of Land Management.

The BLM is at great risk of seriously and irreversibly damaging its reputation across the board, rightly and permanently earning the overall mistrust of Americans by sticking with the lie that wild horses are not native to America. It is just a flat-out lie.

Americans are sick and tired of government agencies lying to them, and that in part was what propelled Donald J. Trump to the presidency. It’s sad that some good people who work at the BLM are tainted by association and because in some cases they are not resisting what they know is wrong, because of job security and retribution issues at the BLM.

Is there malfeasance at the BLM? Here is just a small sampling of easily-discovered examples online:

Making matters worse is that some managers of national monument lands, some of which land is the ancient native habitat for some small herds of symbiotic wild horses, have adopted the policy of excluding wild horses from monument lands, using the defective reasoning and excuse that wild horses are not a native species (the lie).

Given all that is at stake, including the health of the ecosystems, I believe this is a most unwise policy. And when you lose the trust of the American people, it’s just a matter of time before that house of cards falls in on itself.

Because wild horses co-evolved in North America over the millennia, many complex symbiotic mutualisms evolved between horses and many species of plants and animals on the plains and in our forests as a result of the horse’s presence in those ecosystems in North America and elsewhere.

And make no mistake, even though some people get carried away with environmental obsessions, I don’t believe that I can legitimately be accused of such, given my published stance on intelligent (as opposed to emotional) public-land management and use, including the harvesting of game animals, predator control, and proper management of wild horses through range design and fair-handed land allocations, sticking to the Wild and Free-Roaming Horses and Burros Act.

It’s shocking that our Congress set aside over 50 million acres on the basis of scientific recommendations, cogent animal management experience and, most importantly, the will of the American people, only later to have an overlord at the BLM unilaterally roll back the land allocation under the Act to just over 30 million acres, taking roughly 20 million for their own purposes. Theft? Malfeasance?

Congress enacted the Wild and Free-Roaming Horses and Burros Act in 1971, an Act of Congress expressing the will of the majority of the American people that these animals be preserved. But we seem to have a serious problem related to some power-hungry overlords running this agency fiefdom known as the BLM.

So when Obama expanded the monuments in America, I stood against that expansion (in many places) because in addition to the abuse of the Antiquities Act, it also expanded unreasonable exclusion areas for our American wild horses because of the false claim by the BLM that the wild horse is not native. Now, in addition to the horses being squeezed out of their federally-designated lands by the BLM, the monument lands are also off-limits.

So now, thanks to Obama, the exclusion areas for native wild horses include many niche habitats where the animals are critically important to the health of the forests and watersheds. I have expounded further on that in an article you can read here.

Due to excessive fuel loading of ungrazed wild grasses and shrubs — things horses eat — the removal of wild horses, the loss of deer populations through predator mismanagement, and reckless forest management practices, over a million acres of our forests in the Pacific Northwest and elsewhere have been burning to the dirt on nearly an annual basis. Much of the wildfire danger stems from abundant dry grasses and could be abated simply by allowing the wild horses back where they belong. It is logical and most reasonable that a portion of grasses be grazed by native mammals, including wild horses.

In other words, the BLM is driving our American native wild horses and burros into extinction by eliminating access to all of their traditional American habitats that extend back through the millennia.

More clues as to the lies of the BLM:

There are horse fossils from past millennia right here in America, in Oregon and other states. There are horse fossils on the Cascade-Siskiyou National Monument. And even an amateur geologist knows that it takes thousands of years for fossils to form. This means that the horse fossils found in the American landscape are from the horses that evolved right here in America centuries before the Vikings and Spanish explorers arrived on the shores of the North American continent. So the entire fairy tale being promoted by the BLM, U.S. Forestry Service and others about horses being “introduced” onto the North American continent is just a load of cow dung that’s stinking up what should be a more honest debate about government malfeasance and mismanagement of public lands and animals.

If the BLM continues in its malfeasance and in its programs of misinformation aimed at the American people, the people will have to take the BLM to task in courts around the country and in the court of public opinion via mass media.

And furthermore, people should start evaluating litigation against administrators personally when they lose their immunity as a result of any breach of their fiduciary duty to the public trust.

And when the BLM wants anything from the American people in the future, whatever it is, maybe the answer to them must be a “no,” at least or until the BLM changes its ways and drops the criminal levels of malfeasance. If some of the administrators of the BLM and Forestry Service were subject to the laws imposed upon administrators in the private sector of business, like the Sarbanes-Oxley Act, many more of them would be in jail for malfeasance.

The BLM has already done enough damage to the public lands and to the animals with whose management it is entrusted. It’s time for the citizens of America to step in and get this fixed. We need to be more than a squeaky wheel; we need to be heard all the way to President Trump’s office!

The Wild and Free-Roaming Horses and Burros Act of 1971 protected the wild horses and burros so Americans (that’s us and apparently not them) would have the opportunity to enjoy them, so a critical part of our American heritage and living history was safe and protected and could be also enjoyed by our future generations. Now we are the aggrieved party in that this promised benefit to Americans by the government is not being honored. There are legal claims that can be made as a class, and also other civil and criminal actions that can be pursued via our courts. We also need to press our legislators for more penalties to deal with agencies and administrators who violate the public trust with acts of dishonesty and malfeasance.

It’s a darn shame when Americans have no choice except to sue their own government in order to get it to do what it already knows it should be doing.

If John Wayne were alive today, he’d have a bone to pick with the BLM …