by Bryce Miller as published on the San Diego Union-Tribune

“When Herrick and Lovely Finish look at each other, they see the fading pink streaks and stubborn patches of flaky skin that show the fire’s lasting imprint..” 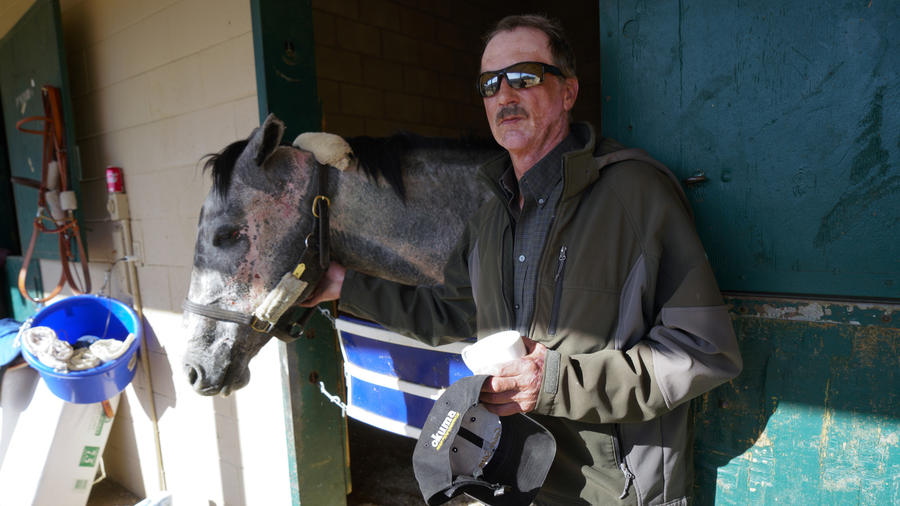 Horse trainer Joe Herrick and his filly Lovely Finish enjoy a quiet moment before heading out on the Del Mar race track for a light workout. Herrick and Lovely Finish were both burned at the San Luis Rey Downs Training Center in Bonsall on December 7 during the Lilac fire.

When the mic ends up in the hands of Joe Herrick on karaoke night at Coyote Bar & Grill in Carlsbad, he’s known to rip into the 1972 toe-tapper “Your Mama Don’t Dance.”

Herrick channels a little Kenny Loggins, a touch of Jim Messina and a sprinkle or two of his own youth as regulars bounce along to the dusty reminder of rock and roll, long hair and adolescent rebellion.

It’s not always about smiles when Herrick sings, though. The darkened edges of his head and heart reserve time for the grieving, the pain being processed — still and maybe always — after losing six horses and nearly his own life when fire burned nearly a quarter of his body Dec. 7 at San Luis Rey Downs.

He grabs the mic again. The strains of the Gary Allan song, “Life Ain’t Always Beautiful,” slowly drift across the bar.

Life can knock you down

It can break your heart.

That Herrick and Lovely Finish are training at Del Mar racetrack and planning to race again signals a triumph of spirit over crushing sadness. The man and the filly who pulled each other from the flames forge ahead. They don’t forget.

But the struggles make you stronger

And the changes make you wise

And happiness has it’s own way

Of taking it’s own sweet time.

Herrick, 55, knows the lyric is coming — as sure as a train finds its way down the tracks. The words remind him of the horses lost and how profound connections between humans and the animals in their lives can become.

And wish for just one minute

That I could see your pretty face …

When Herrick and Lovely Finish look at each other, they see the fading pink streaks and stubborn patches of flaky skin that show the fire’s lasting imprint. They see something else, too: There’s a shared purpose that willed them from a smoke-choked stall and back onto the track.

They see a road to the races. They see the winner’s circle.

As Herrick stood next to the stall on the northwest edge of Del Mar’s Barn KK last week, Lovely Finish demonstrated her true talent … destroying any hat he wears.

The latest victim was Okuma fishing tackle, which was struggling to maintain its perch on Herrick’s head with failing electrical tape on the back strap. It slumped and slid off, like the one before it and the others to come.

The story of Herrick and his horse circled the globe, with a Union-Tribune video racking up more than 4.3 million views and 71,000 shares. She’s been adopted, from Escondido to England. A track worker stopped at the stall Tuesday to plant a smooth kiss on Lovely Finish’s salt-and-pepper nose.

“She’s probably the most kissed horse in the history of thoroughbred racing,” Herrick said.

Lovely Finish has lost the wide, raw patch that ran from cheek to left-front shoulder, but still mischievously targets hats through a glowing left eye Herrick calls “Las Vegas hangover red.” Hints of Herrick’s 12 days in a Hillcrest burn unit linger along his neck and up and down his arms and hands.

Herrick can make a fist, something the scar tissue refused to accommodate the first couple months after the Lilac Fire tore through the horse training facility near Bonsall.

When the pair of survivors ambled onto the Del Mar grounds a month ago last week, they found their footing together.

“She was real nervous when she got here,” Herrick recalled. “She was near death the last time she was here. She remembered where she was. When we put a rider on her, her ears went up. She was super happy to go to the track.”

Lovely Finish trains a couple miles a day. She mostly jogs, but Herrick sometimes decides to ramp her up to a gallop on days when the energy and want-to sparkles in her eyes.

“It would be special to do it here,” he said.

The recovery extends in all directions. Herrick rejoined an adult soccer league at the Encinitas YMCA five weeks after the fire. The goalie recently played five games in six days. Lovely Finish is named after the English phrase for an artful goal.

A GoFundMe page operated by Santa Anita paid for about half of Herrick’s $25,000 in equipment losses. Another page started by a woman he’d never met steered another $6,100 his way.

Herrick marvels at the kindness of so many, including a dozen or so others who offered hard-to-find healing products that line one wall of his tight, tidy Del Mar office. He’s buoyed by a beautiful symphony of souls who chose to touch his in a world too quick to conflict.

To restart his racing life, the starting line represents true ground zero. The barn is comprised of just Herrick and his horse.

“She kind of likes that,” he said. “She doesn’t have any competition. She gets a little possessive and jealous. If I had another girlfriend, she’d kick me in the face.”

So each day, they train. Just like all the other horses and the people guiding them. Just like before.

“Getting back into a routine,” Herrick said, “has been great therapy for both of us.”

In the burn unit, medical staff shaved Herrick’s head, eyebrows and mustache as they worked to reduce the swelling that made him unrecognizable. He ran his hand through what’s regrown this week, joking about the money he’s saved on haircuts.

A veterinarian told Herrick that Lovely Finish likely would lose the tips of her ears. They curled up, leaving a flatter edge across the top.

In the chaos of the fire, the filly lost a shoe that led to a bruise on the inside of the right front hoof. A patch protects the crack, which eventually will grow out. Other than that, Lovely Finish remains the horse who made a spirited debut just a month before the fire.

In the Nov. 5 race at Del Mar, she overcame the dreaded No. 1 post along the rail and a start that buried her 15 lengths back. The 17-to-1 long shot finished a hard-charging second.

The bond between Herrick and Lovely Finish attracted the cameras of ESPN. The network collected footage during an annual BBQ Herrick and others throw for Del Mar workers. Something’s scheduled to air when the pair races again, he said.

“There’s always little speed bumps in the road on the way to the racetrack,” Herrick reasoned. “You’ve got to roll with the punches in life.”

So, Gary Allan and Herrick sing …

But I know I’ll be fine

But it’s a beautiful ride.