Land of the Free

by Chris Madson as published on HATCH 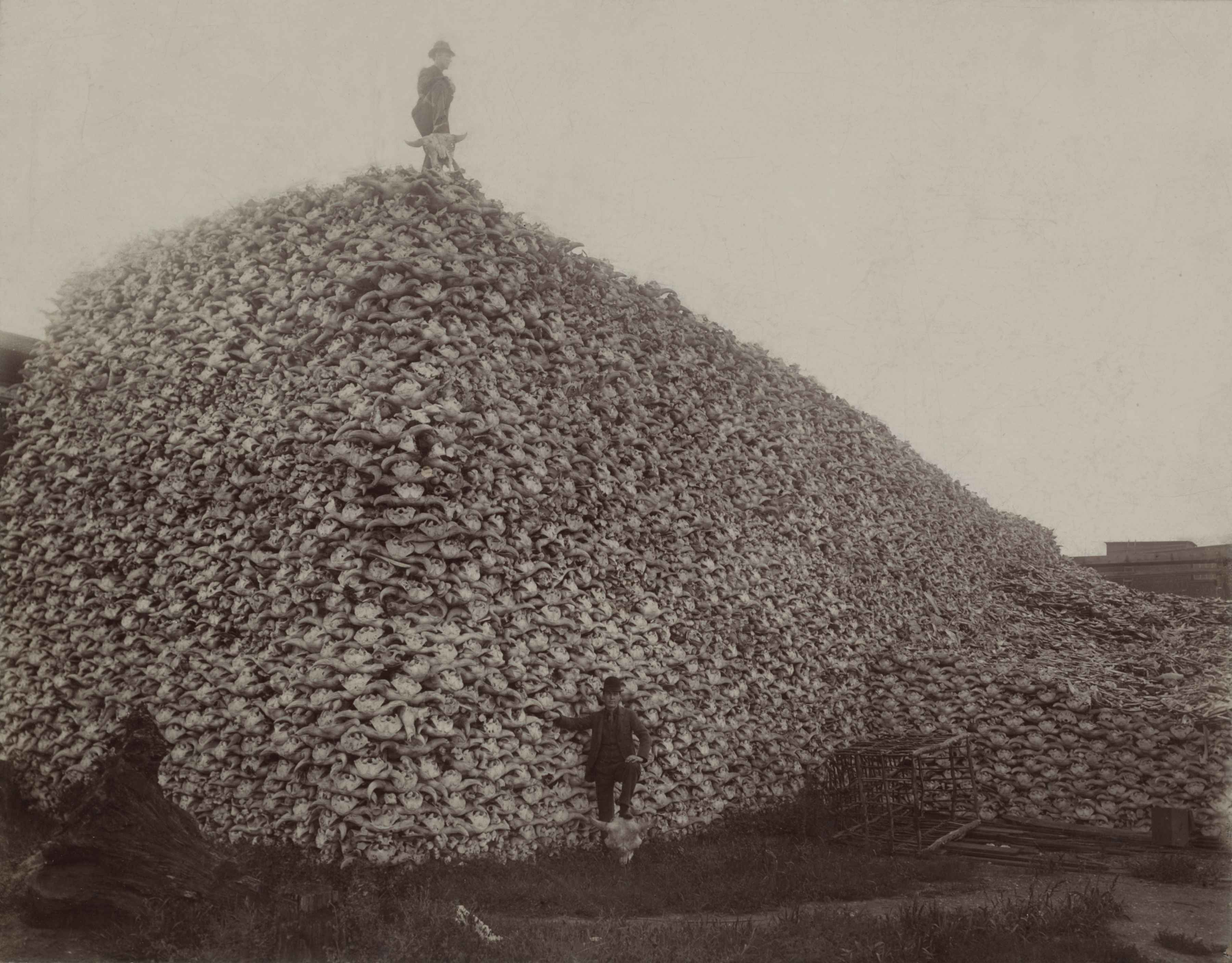 Photograph from the mid-1870s of a pile of American bison skulls waiting to be ground for fertilizer, circa 1870 (photo: Unknown).

America’s public domain was saved from the excesses of business by visionaries. It was set aside for all the people. That’s how it should remain.

It was the culmination of nearly three centuries of the pursuit of profit. What began in tiny enclaves along the east coast marched steadily out into the unexplored continent, consuming land and people as it went, until it reached the prairies and high county of the West. Our myth has it that the process was driven by stalwart men and women yearning to breathe free, but they were only pawns in the great game. From the very beginning, the process was driven by corporate investment, often with immense government backing, and by the time it reached the Rockies, it had developed into a well-oiled machine.

It began with fur. The myth whispers tales of dauntless men in buckskins braving the wilderness, but the reality was corporate. Giant firms like the Hudson’s Bay Company and the American Fur Company controlled the business, providing the trade goods and transporting the take to markets in Britain and Europe. Before they were finished, the beaver had practically disappeared, and the bison teetered on the edge of extinction.

Then came the miner, not the bearded sourdough of legend, but corporate giants like Anaconda, Homestake, and Phelps Dodge, outfits that had the capital to chase the mineral lodes and the influence to dodge the liability for the damage they did in the process. They poisoned streams, stole millions of board feet of timber from the public domain, and provided an insatiable demand for the wild meat provided by local market gunners.

After that, the Union Pacific and Central Pacific and Northern Pacific arrived on the scene, the companies that tied the nation together with steel, and at the same time, stripped the mountains of timber, corrupted a generation of U.S. Congressmen and state officials, and maneuvered the government into funding schemes so ruinous that they triggered the Panic of 1873 and nearly ten years of the worst depression the nation had ever seen.

The rangelands were not spared. The myth of the cowboy hides the reality of the cattle baron. Backed by millions of dollars from investors as far away as Great Britain and Scotland, these entrepreneurs defrauded the federal government and the American people of millions of acres of land through criminal abuses of the Homestead Act. They illegally claimed millions more acres of the public domain, and when the law wasn’t enough to exclude small-time operators, they occasionally hired gunmen to shoot them down. By the time they had finished, the range had been severely overgrazed and the cheatgrass disaster had gained a foothold in the Great Basin.

C.A. Smith, Frederick Weyerhauser, and their competitors used similar tactics to lay claim to huge tracts of pristine timber in the Northwest, finishing the assault on western forests that the railroads and mining companies had begun.

This was the western landscape at the close of the nineteenth century: a land controlled and operated by millionaires and conglomerates, many of whom had stretched the law or simply flouted it to control the economy and politics of the public domain. A land stripped of its pristine promise: the range overgrazed; the forests over-cut; mountainsides raw and bleeding from the pitiless extraction of precious metals; streams polluted; the great herds of game, the beaver, the sage grouse all but extinct.

The entire nation was appalled. The people of the United States were still firmly committed to the ideals of personal freedom and entrepreneurship, but they had seen enough of the abuse of public lands in the West. Faced with the ruin wrought by an unfettered market and a moneyed elite, a generation of Americans began looking for a different way to realize the democratic ideal in the arid West.

The movement proceeded from the notion that our common interest is sometimes best served when we own certain things together. The idea of places and resources held in the public trust gained traction with wildlife in the 1840s and was extended over the next century to the great open spaces of the West’s public domain. It gained momentum with the creation of the world’s first national park in 1872 and continued with the establishment of the first national forest on the eastern edge of Yellowstone National Park in 1891. By the time Theodore Roosevelt became president in 1901, the nation was already well on the road to a different approach.

Gifford Pinchot, one of Roosevelt’s closest friends and advisors, is widely credited with providing Roosevelt with the concept of wise use of the land, particularly federal land, and a term for that sort of sustainable use: conservation. Roosevelt was not only an enthusiastic advocate for wildlife and wild land, he was also a consummate politician. He recognized the value of conservation as a middle ground between the destructive land use policies of the nineteenth century and the preservationist reaction to those abuses by men like John Muir.

A handful of local interests, often backed by corporate money and influence, were loud in their opposition to the concepts of national forests and grazing lands that men like Roosevelt championed, but the nation as a whole supported the idea of federal reserves and the sustainable use of natural resources on those reserves.

Of course, the devil is always in the details. The definition of “wise use” of public lands has been argued ever since it became a tenet of federal management with the passage of the Forest Service Organic Act in 1897. In 1960, the concept officially morphed into “multiple use,” a phrase that may be even less useful in defining the details of federal land management than its predecessor…(CONTINUED)