By Joe Drape and Corina Knoll as published on NYTimes.com

Racetracks in the United States have a particular problem with horses dying. Nearly 10 horses a week on average died at American racetracks in 2018… 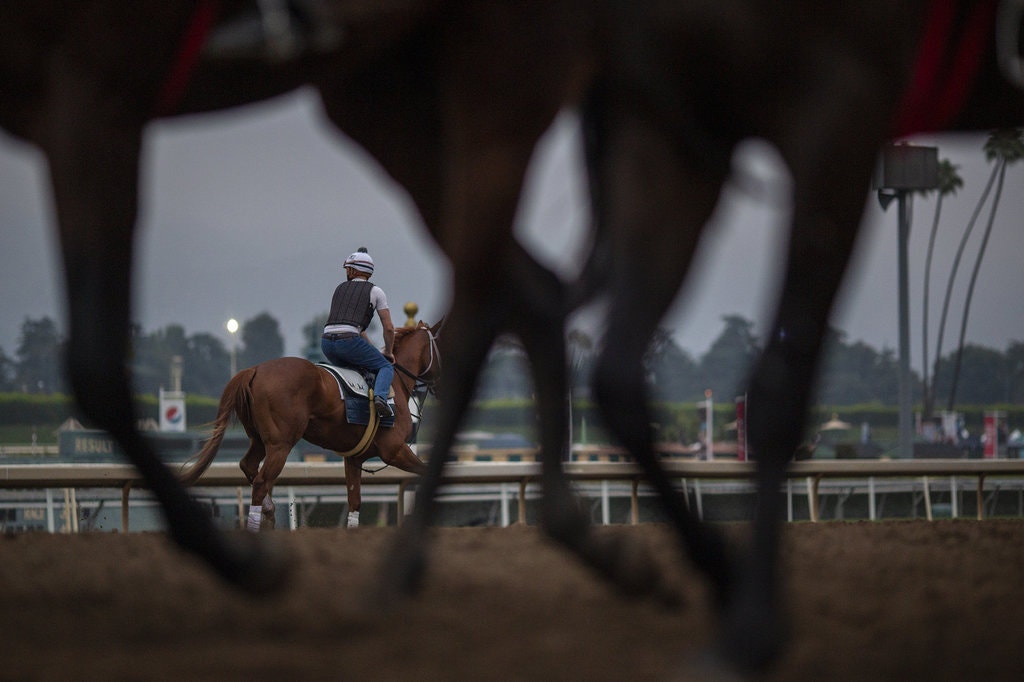 Santa Anita Park in California. Thirty racehorses died at the track this season, which began in December and ended on Sunday.
Credit David Mcnew/Getty Images

ARCADIA, Calif. — On the morning of March 29, Santa Anita Park was reopening for racing for the first time in three weeks after the mystifying deaths of nearly two dozen horses.

But California regulators were watching a live surveillance feed of a trainer’s assistant carrying a bucket into the stall of a horse named Tick Tock. Moments after the assistant left, a white foam was visible on the horse’s lips, often a telltale sign of performance-enhancing drugs.

Investigators later found syringes in the bucket, along with a fatigue-fighting agent known in racing parlance as a milkshake, according to hearing transcripts from the state’s Horse Racing Board.

The news that investigators believed Tick Tock had received such a concoction — before the first race on the first day of the track’s return to racing, no less — is indicative of the dysfunction that has enveloped Santa Anita the past six months, a period when horses had to be euthanized after suffering fractures at an alarming rate. Thirty horses have suffered this fate since Dec. 26 at Santa Anita, a storied racetrack that became a flash point this year for activists who want to ban the sport altogether.

Racetracks in the United States have a particular problem with horses dying. Nearly 10 horses a week on average died at American racetracks in 2018, according to the Jockey Club’s Equine Injury Database. That figure is anywhere from two and a half to five times greater than the fatality rate in Europe and Asia, where rules against performance-enhancing drugs are enforced more stringently. Even so, what transpired at Santa Anita, where a horse was put down more than once a week, on average, stands out.

Despite advances in veterinary care, rehabilitating horses from fractures is rare, because the animals cannot be immobilized. Finding a direct cause for the demise of a single horse, much less 30 of them, is nearly impossible. But interviews with state regulators and more than two dozen people who work at Santa Anita revealed an array of factors that put horses’ lives at risk.

Many of those people lay the blame on a push by the Canada-based Stronach Group, which has owned the track for two decades, to maximize profits.

Company officials, including Belinda Stronach, the chairwoman and president, insisted that safety had always been the top priority, though she has never hidden her desire to make Santa Anita as profitable as it can be — profitable enough to resist the temptation to sell the track to developers.

The push to boost revenues required a relentless racing schedule, the people said, despite unusually rainy and cold weather in Southern California that might have made the track less safe. Of the 30 deaths, 11 occurred during training, when horses were presumably not going full speed, suggesting problems with the track’s surface.

And to increase betting, track managers held more races with bigger fields, which put intense pressure on trainers to race horses that may not have had enough rest or been in the proper condition, owners and trainers said.

The track tolerated trainers who had been cited for using performance-affecting drugs, records showed. Experts have long considered drugs a leading cause of horse deaths. Not only do they dull pain and mask injuries, letting at-risk horses run when they should not, but they make horses unnaturally stronger and faster, increasing stress on their limbs.

“It was the perfect storm of terrible weather, a dearth of horses — many of them who shouldn’t have been running here,” said Rick Arthur, the equine medical director for the California Horse Racing Board. “There was a big push to fill races, and some people haven’t been as cautious as they should have, on both sides.”

State regulators are investigating the rash of deaths, as is the Los Angeles County district attorney’s office.

The drive to add more races came from Santa Anita’s chief operating officer, Tim Ritvo. Along with other executives, Mr. Ritvo threatened to limit — or eliminate — trainers’ stall spaces if they did not enter horses frequently enough, according to owners and trainers at Santa Anita. One of the executives, P.J. Campo, had been hired by the Stronach Group after leaving the New York Racing Association. Under his watch, 21 horses died at association tracks during a similar period in 2012.

That spike prompted a government-appointed task force to issue a critical report on how Mr. Campo, and other New York officials, seemed to prioritize filling races over ensuring that horses were fit.

Ms. Stronach acknowledged that Mr. Ritvo had been brought on to increase Santa Anita’s profits. But she said that “‘more is better’ is not a company philosophy,” and she rejected the idea that her executive team forced trainers to run unfit horses.

“No one has said that you can’t be here if you don’t run,” she said.

Santa Anita, known as the Great Race Place, has always been one of the most glamorous racetracks. It was the home to Seabiscuit, and Hollywood stars have flocked to its postcard-perfect setting beneath the San Gabriel Mountains, 15 miles northeast of Los Angeles.

That location makes its land exceptionally valuable — estimates range close to a half-billion dollars — and attractive to developers.

The Stronach Group is family-owned. The family patriarch, Frank Stronach, is a Canadian auto-parts billionaire who has invested much of his fortune in breeding and owning thoroughbreds and acquiring showpiece racetracks, even as interest in the sport has declined. He bought Santa Anita for $126 million in 1998.

There is a continuing financial battle within the company. Mr. Stronach, 86, is suing his daughter, Belinda, for nearly $400 million in Canada, alleging that she has enriched herself and locked him out of his empire. Ms. Stronach, 53, has countersued, asserting that her father has spent excessively, though she said she does not want to take the easy way out and sell the land to developers.

“I’m prepared to reinvest, make less money and put the foundation in a place that we can be proud of,” she said in an interview. “I’m not trying to get rid of it.”

How Safe Was the Track?

On March 2, Eskenforadrink, a 4-year-old thoroughbred, arrived on the Santa Anita racetrack to an air of expectation. She was favored to win the third race of the day, one that came with a $22,000 purse.

She was slow out of the starting gate, but took the lead on the first turn of an oval muddied by rain.

Less than a minute into the one-mile race, Eskenforadrink lurched and began to stagger, her head bobbing unnaturally as she struggled to stand. Her jockey wrenched the reins to keep her from falling.

“You’re seeing it, and you don’t think it’s going to happen to you,” said the horse’s trainer, Jorge Gutierrez, 53, who watched the race from a monitor.

Eskenforadrink had sustained a fracture to her right front fetlock. She was put down, becoming the 20th horse to die at Santa Anita Park since the previous December. Her death was particularly discouraging. Just days earlier, a specialist had examined the track and declared it “100 percent ready.”

In 2010, Santa Anita became one of several prominent tracks to abandon synthetic racetracks made of sand, rubber and silica after a short-lived experiment. The fatality rates had been far lower, but maintaining the tracks was vexing and expensive.
Many didn’t like them. Trainers complained the surface was causing an uptick in soft-tissue injuries. Some bettors found the newfangled racetracks difficult to make winning bets on. Owners and breeders said the tracks favored turf horses.
After Santa Anita returned to its traditional mix of sand and dirt, catastrophic injury rates were not out of line with those elsewhere. This season, though, the company courted danger by consistently running races, often regardless of conditions, during one of Southern California’s wettest and coldest winters in decades.
With accidents mounting, Mick Peterson, a track surface expert from the University of Kentucky, used ground-penetrating radar to scrutinize the soil’s moisture and consistency. He found no irregularities.
Dr. Peterson was on a layover at the Atlanta airport heading home when he got the call about Eskenforadrink.

“You start going through everything you’ve done to make sure you didn’t miss anything,” he said of the call.

Dr. Peterson said problems might have been caused both by the excessive rain that flooded the region earlier this year and maintenance decisions made while the soil was drying out.

The situation called for Dennis Moore, an expert on racing surfaces with more than four decades of experience. He is the track superintendent at both the Del Mar and Los Alamitos courses. Until December, he also worked at Santa Anita…(CONTINUED)

Categories: Horse News, Horse Slaughter, The Force of the Horse