By Michael Brice-Saddler as published on The Washington Post

A 4-year-old horse was euthanized after suffering an injury at Santa Anita Park, the historic California racecourse that has garnered widespread attention amid a recent string of equine fatalities. 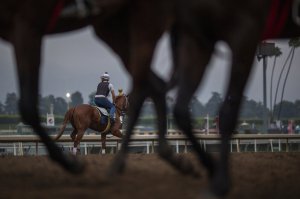 The most recent case involves a 4-year-old gelding named Zeke who, according to the Los Angeles Times, was euthanized Monday after working on Santa Anita’s training track, considered to be the facility’s safest surface. Thirty-one horses have died at Santa Anita since Dec. 26, the Times reports, and 30 of those deaths occurred during the track’s winter-spring meeting that ended June 30.

Zeke was diagnosed with a pelvic fracture and euthanized at the behest of veterinarians, according to the Times. Before Monday, 1,034 workouts had taken place without incident on the training track.

Dionne Benson, the chief veterinarian of the Stronach Group, said in a statement that her staff and colleagues were “devastated” by Zeke’s death. (The Stronach Group owns Santa Anita and other major tracks, including Pimlico Race Course in Maryland.)

“We are carefully reviewing what factors could have contributed to Zeke’s injury,” Benson said in the statement. “Santa Anita will continue to work closely with the California Horse Racing Board and will continue to be transparent with our stakeholders and all of our constituents, including the public, as more facts come in.”

[Breeders’ Cup will remain at Santa Anita, where 30 horses have died since Christmas]

Benson said in the statement that the horse’s body will be analyzed by the veterinary medicine school at the University of California-Davis. Those findings, she said, will be reviewed by the California Horse Racing Board.

The string of horse deaths at Santa Anita prompted officials to temporarily cease racing at the track in early March to establish new regulations — including limitations on the use of an anti-bleeding medications. The fatalities even drew the attention of Sen. Dianne Feinstein (D-Calif.), who in April called for all racing at Santa Anita to be suspended “until the cause or causes of these deaths can be fully investigated.”

Later that month, Los Angeles County District Attorney Jackie Lacey announced she would create a task force to investigate the horse deaths. After a 4-year-old gelding suffered an injury during a race in early June and was then euthanized, the CHRB recommended Santa Anita halt racing temporarily but “allow horses to continue to train.” That request was met with resistance from the track’s management.

There was even speculation the spate of deaths would cause the hosts of the Breeders’ Cup, which takes place at Santa Anita in November, to consider a new venue. But the Breeders’ Cup 14-member board of directors voted unanimously in late June to keep the race at its original location, citing “meaningful and effective reforms and best practices that have been implemented in recent months.”

The Times reports that it has been 14 weeks since a horse has died racing in the sport.