Hundreds of retired thoroughbreds have been sent to abattoirs and knackeries 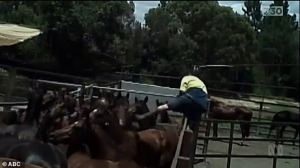 The RSPCA in New South Wales sends broken-down thoroughbreds to knackeries  where they can be processed into pet food and the Victorian branch uses abattoirs to euthanise them.

Branches of the animal welfare charity in South Australia, Queensland and the ACT say they do not send horses to slaughterhouses under any circumstances.

The South Australian branch does put livestock other than horses through saleyards and at one time used the services of Adelaide Zoo to euthanise animals.

The zoo, which killed the animals for free, fed the carcasses to its lions and tigers.

The ultimate fate of broken-down racehorses and other stock taken in by the RSPCA nationwide can depend on the state where the animal is seized.

RSPCA state branches operate independently and set their own policies for the destruction of animals including horses which cannot be expected to survive.

‘On occasion the only mechanism for disposing of very diseased, unwell or aged stock animals is via abattoir or knackery facilities,’ a spokeswoman said.

‘RSPCA NSW has in the past sent stock to abattoir, and continues to do so in a variety of circumstances.’

The animal welfare charity’s Victorian branch does not send live animals to knackeries, which produce pet food, or abattoirs, which process meat for human consumption.

It does employ knackeries and abattoirs to euthanise horses and the facilities then retain the carcasses.

‘RSPCA Victoria believes that physically healthy and behaviourally sound companion animals that are suitable for adoption should not be euthanised,’ a spokeswoman said…(CONTINUED)

For the rest of the story and video (WARNING Very Graphic)