They Shoot Horses, Don’t They? Some Wild Horse & Burro Advocates Do!

“This is a necessarily-long article given all the moving parts in wild horse advocacy today.” 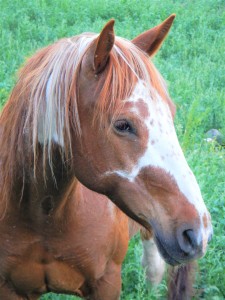 ‘Thunder’ the stallion, one of the spirit horses in ‘Our Herd’ at Wild Horse Ranch reserve.

And all of the ‘moving parts’ are combined with a lot of intentional misinformation promoted by both the Bureau of Land Management (‘BLM’), and sadly, by some of the so-called wild horse and burro (‘WHB’) non-profit organizations.

Such WHB non-profit organizations are raking-in $-millions off the plight of American wild horses, so they have little or no motive to see the horror show end.
And even as the executive directors of these non-profits watch their own horror videos and photos of brutal wild horse roundups, they are living in the lap of luxury by paying themselves handsomely using donation dollars. Many are sitting on bank accounts containing $-millions, as they merely watch wild horses, whose freedom could be cheaply bought, head off to slaughter via kill-buyer auctions. And they keep asking for more money!
‘Insanity is doing the same thing over and over and expecting a different result.’
Recently, in a long list of politicians over the past decades, yet another politician has come out with what seems like a scripted narrative about saving wild horses provided by a pro-PZP non-profit organization.
California Congressman Ted Lieu has put out a press release today that tells us he cares about wild horses. Of course we all applaud any such public disclosure.
However, like many others before him, Congressman Lieu has been misinformed about the use of chemical sterilization on wild horses using compounds known as PZP and GonaCon, as wild horse management.
Protect Mustangs has aggregated Gov. fact sheets about these chemicals:
https://protectmustangs.org/?p=8749
These two chemicals (PZP & GonaCon) are FDA registered pesticides and are being promoted and used as so-called population control measures on wild horses as part of the devious and sinister wild horse management plan commonly called the ‘PATH FORWARD’.
The following two science-supported articles showcase the very serious issues with PZP and GonaCon:
1) https://www.einnews.com/pr_news/552908330/wild-horses-selective-breeding-and-roundups-are-driving-herds-to-extinction
2) https://www.einnews.com/pr_news/556911295/killing-the-wild-in-wild-horses-the-travesty-of-american-wild-horse-advocacy-and-management
THE PATH FORWARD

PATH FORWARD: We see the names of some so-called wild horse non-profits on this death warrant for wild horses, other names associated to crafting this insidious management plan are not as obvious.

The PATH FORWARD was cooked-up by non-profit organizations that have long track-records of not helping the situation with wild horses, just look at what’s happening today, is that results?

Accused sex predator Wayne Pacelle was at HSUS when the Path Forward was being cooked-up along with his right-hand man, Marty Irby, both of whom have since joined-up and formed three new non-profits that allegedly seek to help animals. They frequently use lawyer Scott Beckstead as their media mouthpiece.
However, Irby and Pacelle are so notorious that their new non-profit organization, ‘Animal Wellness Action’, already has a *File* at the watchdog organization Activist Facts!
The Activist Facts file can be read here: https://www.activistfacts.com/organizations/animal-wellness-action/
Other contributors to this insidious Path Forward are known horse haters and horse abusers, which include organizations and representatives associated to industrial livestock producers as well as oil, gas and mining companies, such as Lucas Oil.
With Friends like these who needs enemies?

Return To Freedom was involved in crafting the PATH FORWARD, and they have been profiting off the ongoing plight of wild horses since the year 2000.
In 2000, the most brutal agency when it comes to dealing with wild horses, the U.S. Fish and Wildlife Agency, paid Return To Freedom $440,000 to ROUND UP wild horses.
Maybe that Org should consider a name change to ‘Return To Confinement’?
Read about that massacre here: https://www.mailtribune.com/okategoriserade/2022/04/18/jwytyke-the-american-war-horse/
The PATH FORWARD
The PATH FORWARD basically uses two key tactics that are scientifically designed to effect the ultimate elimination of wild horses from the public lands.
Mega-Corporations intend to use the same public lands exclusively for industrial livestock production as well as for gas, oil and mineral extraction enterprises, so wild horses are seen as problem.
The immense amount of money and political influence these Mega-Corps wield makes them virtually unstoppable. And the sooner people understand that fact, the better off we all are (especially wild horses) because that realization allows us to adopt tactics that are appropriate and effective to the problem faced by wild horses.
PATH FORWARD simplified:
Tactic 1:  Reduce wild horse populations to make tactic number 2 more effective; and,
Tactic 2: Treat remaining wild horses with chemicals that cause sterilization and Genetic Erosion of the species. These are proven side-effects of both PZP and GonaCon.
A final tactic that assures the success of Tactic #2:
Tactic 3:
a) Use bought and paid-for science and propaganda to convince and recruit wild horse and burro non-profit advocacy groups to support, and/or also apply PZP and GonaCon to herds of wild horses by incentivizing them ($), further accelerating the efficiency of Tactic # 2.
b) Get Congress to authorize the use of tax dollars to fund the use of this chemical genocide on wild horses using PZP and GonaCon.
c) Carrot & Stick: Offer grant money to greedy non-profits to shoot wild horses with rifles that fire chemical filled darts into wild horses. Offer grant money to academics to fund studies with designed outcomes, that support using PZP & GonaCon. And punish academics who have contrary opinions to using PZP & GonaCon, by overlooking their grant and funding requests. No money when you disagree!
It’s called: ‘Go-along, to Get-along’.
Make no mistake: The National Academy of Sciences, who endorses PZP is beholden to MONEY, maybe more than good science.
Virtually all academic and commercial research grant money comes from the Mega Corporations directly or indirectly. These Mega-Corps wield total combined annual budgets of $20-Trillion/yr. And they also influence legislators via large campaign donations, as well as influencing who gets funding and/or legislative support.
The ugly truth about PZP and GonaCon is being intentionally suppressed, but can be found with a deep dive into the Internet.
Former Wall Street lobbyist and now journalist Stacilee Sherwood has penned a very eye-opening article about the use of chemical sterilization on American wild horses and the surprising evidence as to why some WHB non-profits are involved.
That article can be read here: https://www.realitycheckswithstacilee.com/post/junk-food-non-profits-their-empty-promises-fail-to-deliver
I have spent months looking into just this aspect of wild horse management, with the eyes of a trained scientist.
HERE (URL below) is just a sample of the results of that research:
https://www.einnews.com/pr_news/556911295/killing-the-wild-in-wild-horses-the-travesty-of-american-wild-horse-advocacy-and-management
WHY USE PZP and GonaCon?
The canard (the lie) is to ostensibly ‘safely’ control (limit) populations of wild horses.
The real questions avoided are:
What are the biological, ecological and genetic costs for this fabricated, artificial work-around that flies in the face of critically important evolutionary Natural Selection, which is Nature’s way of population regulation and maintaining genetic vigor.
With the total on-range population of American wild horses dropping precipitously as a result of record-breaking aggressive roundups, very soon, the total population of wild horses of free-roaming native species American wild horses will hit rock bottom at around 25,000 total free-roaming wild horses in all of America. (well within ESA listing)
At that point, when the total population is at or near 25,000 total horses, the use of chemicals like PZP and GonaCon (GonaCon is being used exclusively by the BLM/USFS) virtually guarantees these few remaining wild horses will never be able to recover their natural populations due to intensive Selective Breeding and Genetic Erosion inflicted upon them by these dangerous chemicals.
Net Result of the planned Genocide of the PATH FORWARD
Ultimately, most of the remaining wild horses on the range will die-off having sired no offspring, a process that over the next 2 to 3 decades will virtually erase wild horse populations from the landscape off camera, and without any news fanfare to draw the ire of the American public. That is a key part of this insidious plan; silently killing wild horses in a way that is unseen to the public.
We must counter monetarily driven agendas supported by bought and paid-for science promoted by Mega-Corps, the Bureau of Land Management and go-along WHB non-profits that currently support and/or use PZP and GonaCon.
We must counter the WHB non-profits who are profiting from the dire situation of American wild horses by engaging and supporting bad management of wild horses.
We must stop funding failure with donations.

Forcing wild horses to live on lands that are severely ecologically damaged from two-centuries of invasive species livestock grazing, and where they are also in conflict with other land use enterprises is just insanity.

This is especially true considering there is over 100-million acres of superior wilderness lands where livestock production is impossible due to many cost-related management logistics and legal factors, yet where wild horses could be restored as keystone herbivores greatly benefiting these wilderness areas.
The Solution = Re-Wilding and Re-Locating Wild Horses into ecologically and economically appropriate wilderness areas!
Definitions:
‘Re-wilding’ means: Taking horses already being held captive in Government-funded corrals and releasing them into remote wilderness areas that are both economically and ecologically appropriate.
‘Relocation’ means: Free-roaming Wild Horses (ad burros) that are being targeted for roundups in areas where they are deemed in conflict would be humanely (as unmolested family bands) bait-trapped and transported and released into remote wilderness areas that are both economically and ecologically appropriate.
We have a proven Plan that provides a humane and natural path (legal and ecological) to re-wild and relocate wild horses into wilderness areas using existing law, where wild horses are restored as keystone herbivores, benefiting ecosystems.
That Plan is called ‘Wild Horse Fire Brigade‘.
Wild Horse Fire Brigade (‘WHFB’) is a new, all-volunteer 501-c-3 California wild horse non-profit.
WHFB was recently formed to enable the rewilding and relocation of wild horses away from taxpayer funded off-range holding of wild horses in corrals, kill-pens and areas of conflict and scheduled roundups.

‘Wild Horse Fire Brigade‘ is the name of an exciting new all-volunteer non-profit org.
The WHFB solution is actually so simple, humane, natural and cost-effective, that the big non-profits who are raking-in $-millions in donations annually and paying themselves handsomely hate this solution because a genuine holistic solution for wild horses will put them out of business in a year or two.
Instead, they are intent on keeping the controversy alive because showing photos of the ongoing abuses (roundups & kill-pens) keeps donations flowing-in.
You can learn more about Wild Horse Fire Brigade at:
https://www.WildHorseFireBrigade.org
Educating the masses and legislators:
As mentioned, California Congressman Ted Lieu issued a press release (URL below).
https://lieu.house.gov/media-center/press-releases/rep-lieu-calls-increased-protections-wild-horses-devil-s-garden-wild
I have already requested an immediate meeting (ZOOM) with him to discuss the value of Wild Horse Fire Brigade.
Now we need your help!
This ask will take just a few minutes.
Please email the Congressman, and in your own words, ask him to ‘look into the wild horse/wildfire management plan called ‘Wild Horse Fire Brigade’.
You can also just email the link to the KDRV ABC NEWS 12 Story about Wild Horse Fire Brigade!
Here is the URL to the ABC News Story:
https://www.kdrv.com/video/more-wild-horses-equals-less-fire-fuels/video_8b3c4ab9-9e43-5c6f-ae4b-89351b795ab1.html
Congressman Lieu’s email is:  lieu.scheduling@mail.house.gov
OR:  Call his office:
His Washington D.C. Phone: (202) 225-3976
His CA Phone: (323) 651-1040
And you can do both! Call and Email for best effect!
The Wild Horses THANK YOU!
Regards, William