The Thunder of Their Hooves

by Jerry Finch, founder and President of Habitat for Horses 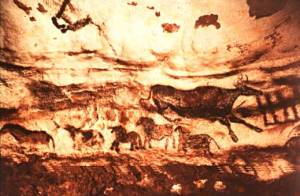 It happened long before our time, far before time even began, in a place of mist and trees, in a place of open land and brilliant moonlight, in a time and space far beyond our creation or knowledge. Aware, alert, in touch with the rhythm of the earth, they lived in a place we never knew, that we could never imagine. Their hoof beats thundered across the plains. Their cries echoed through the valley. In vast herds, in small family groups, they dwelled in a world removed from humans, in a world unto themselves.

I’d like to think it started that way, that the first encounter was of a gentle nature, that the two instantly understood, acknowledged, and eventually passed on through the fog, understanding that nothing, ever again, would be the same for either one of them. Tens of thousands of years ago, seen through the early morning mist – a brief meeting of two spirits that would forever change all that we are to one another. Our future, and that of that horse, would thereafter be entangled together.

They didn’t depend on us. It was us who depended on them. We mounted and rode swiftly across the plains; they became our wings as we soared to distant lands. They carried us, our families and our belongings. They expanded our world far beyond the horizons.

Through some twist of evolution, we were able to bring them into our world. We asked them to forget about their world, to leave behind all that was and become part of all we created. Far later, such a move would be called “dominion” and be claimed as a right given to us from our God.

And under that authority, we herded them, raised them, bred them, stalled them, whipped them into submission, put restraints on them, saddled them, shoed their hooves, and used them until they dropped, then we either left them to starve or killed them and ate their flesh. 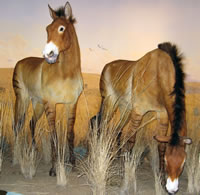 Not all humans did that. Even in the days before the Bible, people wrote of gentle training, of the majesty and the glory that stood before them. On cave walls are paintings that show the wonder of the horse, the awe we felt as we stood before them. The Bible has more references to equines than any other animal. Countless images and words bring an understanding of the devotion that many had, the love which many felt.

Yet our history is one of cruelty, not of love. Many cry over the fallen, while only a few do the killing. We’ve let it go on for so many centuries that we’ve accepted it as human nature. We’ve let the few destroy what the many want to save.

Listen to the horses on a quiet morning. Listen as they nicker to one another through the early morning’s mist. Hear their soft sounds beneath the background of the crickets and the awakenings of the birds. We didn’t remove all that they were. They are still as wild and majestic and perfect as they were ten thousand years ago. They could still live without us. They don’t need us, you and I.

They don’t need us, but we need them.

We need them to forgive us for all we have done, all for all we continue to do. We need them to bring us to the earth, to bring us back in touch with the purity of nature. We need to feel the warmth of their breath, the touch of their nose. We need to be assured that all is forgiven, that we, no matter who we are or what we have done, will be accepted by those who live in a place so far away from our own, in a world that we will never understand, one of which we can only dream.

For we know that despite all the cars we buy, all the digital cameras we own, that regardless of the perfect houses we live in and the jobs we have, we’re missing something. There is emptiness beneath our soul, a piece that was never found in a puzzle that will never be complete. In our desperate attempt to claim all that we see, to show that we are the masters of the universe and all that stretches before us, we’ve forgotten that essential part of our nature that belongs with the hunter, looking through the early morning mist at the stallion that stands before him.

We’re forgotten that we share the world. We’ve claimed dominion, but we’ve failed as caretakers. In our efforts to become gods, we’ve lost sight of the true function of God – to protect and have compassion for the earth.

In listening to the horse we can hear the calling, we feel the return. It’s there, just beyond our reach. If only….if only we could feel the thunder of their hooves.

Categories: The Force of the Horse