The American Wild Horse Is Making Its Last Stand 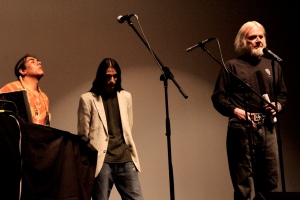 Wild Horses & Renegades was awarded Honorable Mention in the following categories on May 13th 2011, Cinematography, Investigative Journalism and Music Editing/Sound Track.  The film is picking up momentum and receiving requests for screenings from around the world.

Director James Anaquad filmed the concert in HD and will be including clips on the films web site www.theamericanwildhorse.com.

In Wild Horses & Renegades, Anaquad-Kleinert weaves shocking footage of actual roundups with the story of a horse named Traveler and his journey from a strong stallion on the range to a broken inmate at a Bureau of Land Management processing center in Canon City, Colorado. The film captures the pure and stunning beauty of horses in the wild with dramatic western backdrops. Shot in high definition, this film’s incredible aesthetics contrast with the mismanagement of our last wild public lands.

Anaquad-Kleinert has also incorporated beautiful aesthetic footage of horses in the wild contrasted by the brutal BLM roundups in a new call to action music video featuring Who’s Gonna Ride Your Wild Horses, a hit song released by U2.

“If the public could view what’s being done to wild horses, the public would stand up and take action. This is not a film just about America’s Wild Horses, this is a film about what is happening to America itself,” states Michael Blake, author of Dances with Wolves, in Wild Horses & Renegades.

The documentary captures the corporate benefits of wild horse roundups, including clearing land for Uranium mining claims, oil and gas pipelines and corporate cattle grazing. “Our public lands are run by the oil, mining and livestock industries and it’s their way or the highway,” says former Bureau of Land Management Director Jim Baca, in Wild Horses & Renegades.

Wild Horses & Renegades is available for review on request. The film trailer and music video featuring U2’s music are available at www.theamericanwildhorse.com

Please check out a review of the film at the following links: