“March for Mercy” Calls for an End to Wild Burro Shootings 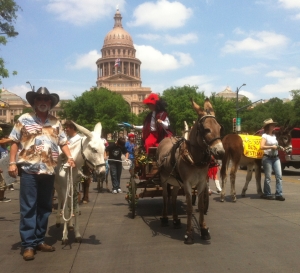 R.T. Fitch with "Nancy" and Marjorie Farabee pulled by "Ms. Abby" during March for Mercy at Texas State Capitol

The day before Easter, Texas Wild Burro Advocates and domesticated donkeys converged upon Austin, Texas to march in protest against Texas Parks and Wildlife Department‘s (TPWD) policy of killing Texas’ last remaining wild equine herd, in Big Bend State Park, to make room for the re-introduction of Desert Bighorn Sheep for hunting permit dollars.  Under police escort the band of humans and donkeys paraded in front of the state capitol and circled the Governor’s Mansion while chanting, “Rick Perry Stop Killing our Wild Burros.”

“Currently the TPWD has declared a temporary ban on the policy of Park Rangers shooting wild burros on sight as they partner with the HSUS to do an aerial study and count of how many burros are actually in the park.

“They have stopped the killings for the past several weeks,” said Marjorie Farabee founder of the Wild Burro Protection League and Director of Wild Burro Affairs for the Wild Horse Freedom Federation (WHFF), ” but if the TPWD performs as they have in the past they will be back to the killing in the very near future and there is no rhyme or reason for the shootings, the burros are not even listed as an invasive species.”

“We see similar behavior of government agencies out of control and making up their own rules as they go out west”, added R.T. Fitch volunteer president of Wild Horse Freedom Federation, “currently the federal Bureau of Land Management (BLM) is in the process of eradicating the nation’s wild horses and burros from Federal land with similar bogus justification as utilized by TPWD.  At the end of the day it is all about ‘special interest’ dollars.”

After the parade the advocates held an rally on the grounds of the state capitol where speakers documented the issues that surround the controversy of killing the Texas wild burros.

“Even the residents of the towns that border the park want the burros to stay, they have been there even before Texas was a state.” added Farabee.

Fitch concluded, “The burros are as much a part of Texas history as the Alamo and Texans stand on the brink of losing a very important part of their heritage.”

For more information on the plight of the Texas Wild Burros visit https://www.facebook.com/Wild.Burro.Protection.League