While Joan Guilfoyle (Bureau of Land Management’s Division Chief of the Wild Horse & Burro Program) continues to struggle to learn what she’s doing and continues to have difficulties being polite to and interacting with wild horse advocates, the BLM brought in a “facilitator” to the August 6 meeting in Reno to discuss shelter for wild horses & burros that are being warehoused in BLM facilities. 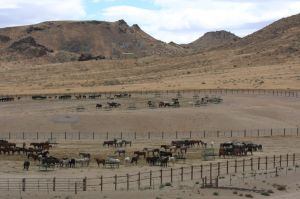 The public’s first clue that smoke and mirrors would be involved in this meeting could be found online in the BLM’s Workshop Handout, which included “WORKING IN GROUPS,” which outlined that people would be working in groups, with a facilitator, and then reporting to the larger group.

In this BLM meeting, instead of just being able to use your own words and speak your own mind, you were led into talking about “trends.”  The BLM workshop handout suggested that “One or more members should ensure that the group stays with the assigned task.”  So much for free speech.

This is the Delphi method, which the Rand Corporation developed in the 1950s.  It has been used to manipulate people.   The goal of the Delphi method is to lead a targeted group of people to a pre-determined outcome while keeping the illusion of being open to public input.

Judith A. Talbot, the meeting facilitator, is an associate with California State University’s Center for Collaborative Policy, which describes collaborative policy making as “a process whereby one or more public agencies craft a solution to a policy issue using consensus driven dialogue with diverse parties…”

Yet, the only two “groups” at this meeting seemed to be BLM employees and wild horse advocates.  So, who were the “diverse parties?”

Meetings using Robert’s Rules of Order facilitate deliberation, debate, and full participation.  The agenda is controlled by the will of the majority.

In a collaborative decision making meeting, a trained facilitator leads the meetings and there is a predetermined outcome.  There are no debates or votes.  The BLM handout for this meeting stated “This is a group brainstorm–no evaluation or agreement is required.”  (Nor was it wanted.)   “The meetings are designed to avoid conflict and confrontation between differing views.”  (Kind of like the whitewash it was.)

Generally, the facilitator leads the discussion with questions that are carefully worded to elicit no response, and then, when there is no response (silence), it is implied that a “consensus” was reached.  The facilitator will eventually write a report and then this will be “the plan.”

In this BLM meeting, the public was tasked to come up with “trends” and the workshop handout stated “A trend implies direction of movement, from more to less, less to more, greater to smaller, smaller to greater, and so on.”  (talk about talking in circles)  And then “We want to observe what is happening and defer judgment and analysis. (I.e. focus on describing the changes that are happening.)”

Isn’t this what the BLM has been doing all along – basically NOTHING?  Now they’ve found a way to continue doing as little as possible by using more ambiguity.

One supposed step of collaborative problem solving is to “educate” the public.  In this meeting, the BLM brought in an “expert” who is listed as having an active BLM research grant, Dr. Carolyn Stull of U.C. Davis.  Per Bonnie Kohleriter’s article, Dr. Stull contradicted herself between what she said at this meeting and a policy paper she co-authored on this issue.

In that policy paper, regarding the minimum standard for shelter, it clearly states “Shelter in the form of a structure must be available for horses in cases of extreme weather conditions (below freezing temperatures, excessively high temperatures and/or humidity, high winds, excessive rainfall) regardless of the horses’ age, breed or body condition.”  In the meeting, Dr. Stull suggested shelter for only compromised horses.

It’s interesting to note that on the Center for Collaborative Policy’s website, it states “collaboration is not appropriate for all decisions. It is not necessary or recommended to use a formal collaborative process for routine, simple or urgent decisions.”

So, the BLM chose a process that isn’t recommended for urgent decisions?

If the BLM ever sets up a collaborative/consensus meeting again, advocates should demand that Robert’s Rules of Order be used for the public meeting.  If the BLM refuses, leave and hold a real meeting in another room or outside, and then present your plan to the BLM.  Your tax dollars pay the salaries of these people, so don’t let them manipulate you or intimidate you.  This isn’t North Korea.

We have advocates who are just everyday people who care about our public lands and who put in countless hours of work to save the wild horses and burros.  Like Monika Courtney.  And Grandma Gregg.  And Carla Bowers.  And Bonnie Kohleriter.  And many advocates have been working hard for years.  Like Garnet Pasquale, Arlene Gawne and Kathleen Hayden.

Our list goes on and on.  I wish I could name every person, because I’m proud of you.  Each person makes a difference.

We, the people, have a “trend” for the BLM.  You might break Roberts Rules of Order, but you won’t break us.  We will not be manipulated by facilitators attempting to water down our fight for the humane care of wild horses & burros, or for on-the-range management of VIABLE herds on their federally protected Herd Management Areas.  End of story.