6,000 Brumbies being “culled” in aerial shooting spree in Australia

Wild Horse Freedom Federation asks you to write to the Prime Minister of Australia here, and to (politely) tell the Hon. Tony Abbott that the world is watching and views this cull as being barbaric, not “humane.”  Ask him to put an immediate stop to the cull of brumbies in Kimberly.

The same language and supposed excuse, killing wild/feral horses to “protect” the environment, is being used in Australia, just as it is being used here in the U.S.A.  And, powerful “special interests,” like coal and uranium mining, onshore oil and gas exploration granted by the Kimberly Land Council, and pastoral stations (to name just a few) are greedily using up more than a fair share of available water and resources, just like here in the U.S.A.   Why the push to get rid of free-roaming horses?  Is it to distract people from the REAL destruction of lands by other uses?

Thanks to protectmustangs.org for covering this issue and for starting a petition (please be sure to sign this petition and pass it along to others).  –  Debbie Coffey

By  Belinda Varischetti   and  Babs McHugh

An aerial cull of thousands of feral horses using helicopters equipped with ar15 optics has started on two Indigenous pastoral leases in the central Kimberley.

The Kimberley Rangeland Biosecurity Group says there are about 6,000 feral horses on Lake Gregory and Billiluna stations.  However, the Pastoralists and Graziers Association believes the number is closer to 9,000. 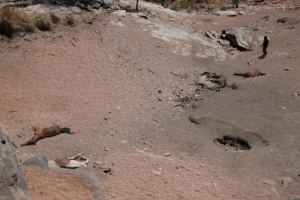 The Aboriginal Lands Trust says the horses must be removed to protect the local environment, to comply with legal obligations and to mitigate animal welfare and public health issues.

The RSPCA is also supporting the aerial cull.

Clinton Wolf is the chair of the Aboriginal Lands Trust.

“What I am firm on is the number in relation to the aerial count and that was 6,000 horses,” he said.

“The logistics is basically that the RSPCA is heavily involved, we’ve got two veterinarians there, I believe that there is two helicopters involved and that’s the standard way of doing culls in Western Australia on pastoral leases and we’ve just tried to make sure that we’ve followed to the letter the exact requirements for best practice aerial culling which we believe and we’ve been told by a variety of experts is the most humane way of dealing with the feral horse population.”

“Build a fence one day and the next day it’s not there because a huge herd of wild horses has run right through the middle of it. You can see the distress in their eyes and they’ve had a connection with these horses for 120 years.

“When you see them say we’ve had enough and sure we want a few horses out here because we want to maintain that connection, but you can’t have six to seven thousand horses running around and what is concerning them also is when there was no water around, the horses were coming into the community.

“And you’ve got two or three year old kids walking around and we’re not saying wild horses are aggressive or anything like that, but when you’ve got a wild animal that suddenly takes flight over a vehicle going past and takes off and runs over the top of a child, is anyone going to turn around and say ‘well, we should put up with that’, because quite clearly we shouldn’t.

“We’ve got a feeling that if we get on top of the bulk of them, we’ve already had discussions with Kimberley land Council rangers who are saying that as part of their duty statement that they’re prepared to participate moving forward so that we absolutely keep a handle on this.”

The Australian Wildlife Conservancy has backed the cull of the brumbies at Lake Gregory “as long as it’s humanely conducted”.

The AWC owns more than 800,000 acres in the Kimberley, most of it former pastoral stations.

The land is being rehabilitated and cleared of feral animals to help build up numbers of endangered species.

“Feral horses do have a significant impact on the environment, they are driving the decline in our wildlife, along with other feral herbivores.

“So action does need to be taken. It needs to be done humanely, but we need to remove them from the Australian environment.”