Ranchers Want Our Public Lands for Their Livestock, and Want the Govt. to Stick It to Wild Horses and Taxpayers

EWA (Chicago) – The Cloud Foundation and Wild Horse Freedom Federation today released BLM livestock data for Beaver County and Iron County, Utah showing that despite a chorus of demands from ranchers for the removal of wild horses from the over-grazed range; the data shows livestock outnumber wild horses 10.6:1 in these areas. 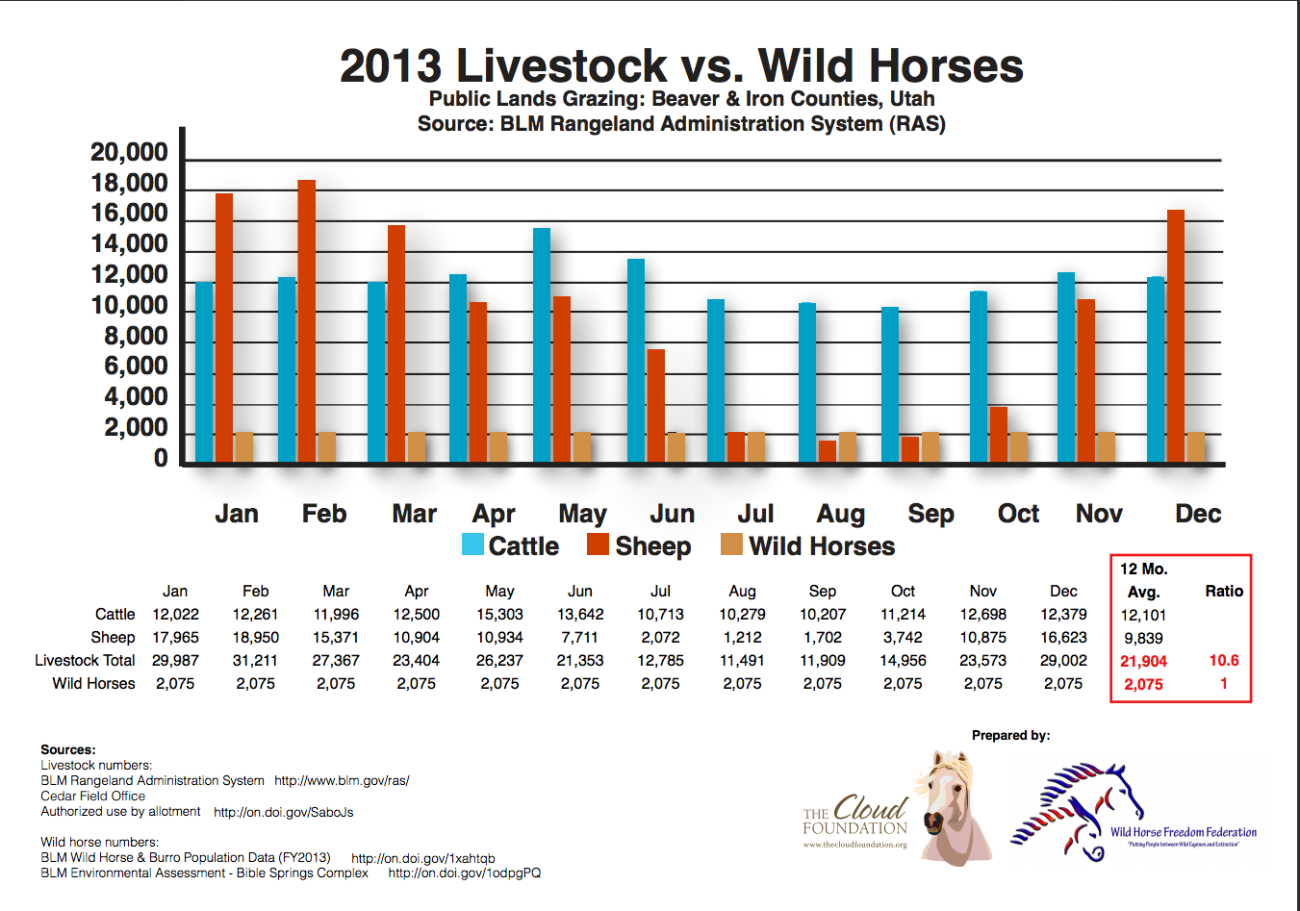 “It is irresponsible and false for Iron County commissioners or anyone to claim that the wild horses in that area are having a significant negative impact on livestock and wildlife as some local news releases have indicated,” stated Bob Edwards, Range Scientist and 30 year veteran of the BLM. “Having been well acquainted with these areas for over 25 years as a BLM employee, it is obvious that resource degradation has been and presently is mostly caused by livestock which have been historically allowed on these areas in excess numbers and duration.

“The situation of lacking forage started years ago with continual overuse of forage resources by livestock. The practice still occurs. To now use the wild horses as a scapegoat, because (delete – the forage is depleted and) livestock numbers must be reduced, is totally unfair and unacceptable,” Edwards continued. “The rationale for this is not and cannot be based on scientific data. The BLM and Iron County commissioners must step up and deal with the real problem on the landscape: allowing livestock to graze public lands.”

Angry ranchers began demanding the removal of the wild horses shortly after the BLM requested them to reduce their own livestock grazing. The ongoing drought has forced the move. “Faced with the loss of cheap forage for their cattle and sheep, the ranchers found a way to deflect the blame and economic burden,” says Vickery Eckhoff, a writer who was fired by Forbes after writing an article critical of welfare ranching.

“When the BLM refers to wild horses as ‘overpopulated’ they must have their tongues firmly in their cheeks,” says Ginger Kathrens, Director of The Cloud Foundation. “The only reason they characterize wild horses as overpopulated is they allocate the lions’ share of forage to livestock.”

“The BLM is correct on one point” states R.T. Fitch, President of Wild Horse Freedom Federation, “Public lands are overgrazed; but the villains are not wild horses, burros and wildlife. The destruction comes from privately owned, BLM-approved, tax-payer subsidized, welfare cattle and sheep.”

Click (HERE) to read “Ranchers who graze their cows on federal lands are hellbent on taking wildlife and the public along with them for the ride.”