Wild Horses & Burros Need Your Voice More Than Ever!

“Yesterday, the House Appropriations Committee passed an amendment that would allow the Bureau of Land Management to kill – shoot – healthy, unadopted wild horses and burros!” 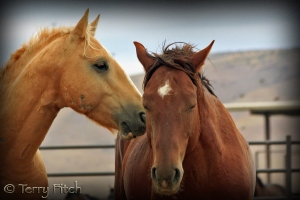 We’ll return to the House vote in a moment, but first we need you to make a call on behalf of horses to each of your senators TODAY. That’s because on Thursday, the Senate Appropriations Committee will vote on an amendment to keep a ban on horse slaughter in place.

Please call the U.S. Capitol switchboard at (202) 224-3121 (if you reach a full voicemail, look for district office phone numbers on your senators’ webpages and call them).

Urge your senators to oppose any provision that:

Remind your senators that proven humane solutions that would enable the management of wild horses and burros on the range have long existed. We do not need to kill national icons.

All of this can be as confusing as it is upsetting. What’s happening is that we’re fighting provisions on parallel tracks, in the House and Senate, which threaten all horses as well as wild horses and burros. To be clear:

The horse slaughter votes are part of the agricultural funding process. In the absence of a total federal ban on horse slaughter, advocates push each year to bar the U.S. Department of Agriculture from using our tax dollars to hire horsemeat inspectors. On July 12, the House Appropriations Committee narrowly rejected this year’s anti-slaughter amendment. If the bill becomes law without it, slaughter plants could reopen in the United States for the first time since 2007. That affects all kinds of horses, domestic and wild, so now we need the Senate to step up and pass an amendment to make sure that does not happen.

Meanwhile, the wild horse votes are part of the interior funding process. As noted above, the same House Appropriations Committee voted to remove language preventing BLM from killing healthy, unadopted wild horses and burros. The amendment passed on a voice vote, meaning individual votes were not recorded. Again, that means that we need to turn up the pressure and ensure our senators stand up for wild horses in the days ahead.

We’ve written that the situation is as precarious for wild horses as it’s been in Return to Freedom’s 19-year history. We wish we were wrong. Alas, today’s vote was still more proof:

We need to push back against propaganda that blames wild horses (never livestock) for range degradation or that falsely claims scores of wild horses are starving and dying – so many that shooting captured wild horses in government corrals or on long-term pastures is held up as a “humane” alternative. We need to push back at the lie that fertility control has been a failure when BLM has never spent more than 3.88% of its budget on PZP.

We need to demand thoughtful nonpartisan leadership that will work with advocates and scientists to create a proud, long-term plan that provides wild horses with a sustainable future on the range.

The American people still have the power to avert a tragedy in the making, but it will take all of us.

Let’s get after it!