“While best known for the Canada-to-U.S. Keystone XL pipeline and the years-long fight to build that proposed tar sands line, the Alberta-based TransCanada has also faced permitting issues in Mexico for its proposed U.S.-to-Mexico gas pipelines.” 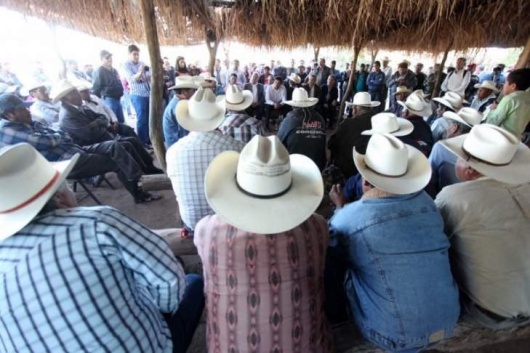 Since Mexico privatized its oil and gas resources in 2013, border-crossing pipelines including those owned by Sempra Energy and TransCanada have come under intense scrutiny and legal challenges, particularly from Indigenous peoples.

Opening up the spigot for U.S. companies to sell oil and gas into Mexico was a top priority for the Obama State Department under Hillary Clinton.

Mexico is now facing its own Standing Rock-like moment as the Yaqui Tribe challenges Sempra Energy’s Agua Prieta pipeline between Arizona and the Mexican state of Senora. The Yaquis in the village of Loma de Bacum claim that the Mexican government has failed to consult with them adequately, as required by Mexican law.

Under Mexico’s new legal approach to energy, pipeline project permits require consultations with Indigenous peoples living along pipeline routes. (In addition, Mexico supported the adoption of the United Nations Declaration on the Rights of Indigenous Peoples, which includes the principle of “free, prior and informed consent” from Indigenous peoples on projects affecting them — something Canada currently is grappling with as well.)

It was a similar lack of indigenous consultation which the Standing Rock Sioux Tribe said was the impetus for lawsuits and the months-long uprising against the Dakota Access pipeline near the tribe’s reservation in Cannon Ball, North Dakota, in late 2016. Now, according to Bloomberg and Mexican reporter Gema Villela Valenzuela for the Spanish language publication Cimacnoticias, history is repeating itself in the village of Loma de Bacum in northwest Mexico.

Agua Prieta, slated to cross the Yaqui River, was given the OK by seven of eight Yaqui tribal communities. But the Yaquis based in Loma de Bacum have come out against the pipeline passing through their land, even going as far as chopping out a 25 foot section of pipe built across it.

“The Yaquis of Loma de Bacum say they were asked by community authorities in 2015 if they wanted a 9-mile tract of the pipeline running through their farmland — and said no. Construction went ahead anyway,” Bloomberg reported in a December 2017 story. “The project is now in a legal limbo. Ienova, the Sempra unit that operates the pipeline, is awaiting a judicial ruling that could allow them to go in and repair it — or require a costlier re-route.”

As the legal case plays out in the Supreme Court of Justice in Mexico, disagreements over the pipeline and its construction in Loma de Bacum have torn the community apart and even led to violence, according to Cimacnoticias.

Construction of the pipeline “has generated violence ranging from clashes between the community members themselves, to threats to Yaqui leaders and women of the same ethnic group, defenders of the Human Rights of indigenous peoples and of the land,” reported Cimacnoticias, according to a Spanish-to-English translation of its October 2016 story.

“They explained that there have been car fires and fights that have ended in homicide. Some women in the community have had to stay in places they consider safe, on the recommendation of the Yaquis authorities of the town of Bácum, because they have received threats after opposing signing the collective permit for the construction of the pipeline.”