“Secretary Zinke has done the bidding of extractive industries over our public lands and national parks since day one,” 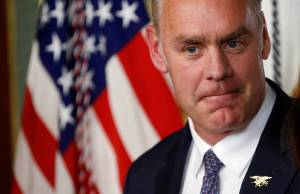 As part of a multi-day trip to the Dakotas, Interior Secretary Ryan Zinke is scheduled to address the Williston Basin Petroleum Conference this very morning. The event is hosted by the North Dakota Petroleum Council, a group dedicated to “provid[ing] governmental relations support to the more than 490 companies it represents who are involved in all aspects of the oil and gas industry.”

Western Values Project (WVP) already documented that over a ten month period in 2017, the timeframe for which Secretary Zinke’s calendars were publicly available, he met with extractive industry executives, associations or lobbyists at least 33 times, averaging nearly one meeting per week.

So, why is Secretary Zinke addressing oil and gas executives, again? WVP found that Secretary Zinke has $85,800 reasons. He raked in that amount in campaign cash from many of the conference’s sponsors, their executives, parent companies or affiliated Political Action Committees.

“Secretary Zinke has done the bidding of extractive industries over our public lands and national parks since day one,” said Deputy Director of Western Values Project Jayson O’Neill. “We’d all be better off if Secretary Zinke spent as much time defending public lands as he does glad-handing with the special interest who have filled his campaign coffers and profit off of our public lands.”

Secretary Zinke has especially strong financial ties to Bakken Now Plus sponsor Oasis Petroleum, his second-biggest corporate donor. In addition to Taylor Reid, the President and COO of Oasis Petroleum being his “top individual donor,” Zinke once bragged that his “first donor” was Oasis Petroleum executive Thomas Nusz, who, combined with his wife, and then-college-aged children, has handed Zinke $29,000 in campaign contributions.

It’s an investment that has been paying off mightily for extractive resource corporations. In addition to ushering in the largest reduction in public lands protections in U.S. history for oil interests, Zinke has rolled back environmental regulations, limited public input, opened thousand of acres to oil and gas leasing in critical habitat, and halted the implementation of the methane flaring rule that has already cost taxpayers over $36 million in royalties among others.