By Lisa Friedman as published in The New York Times 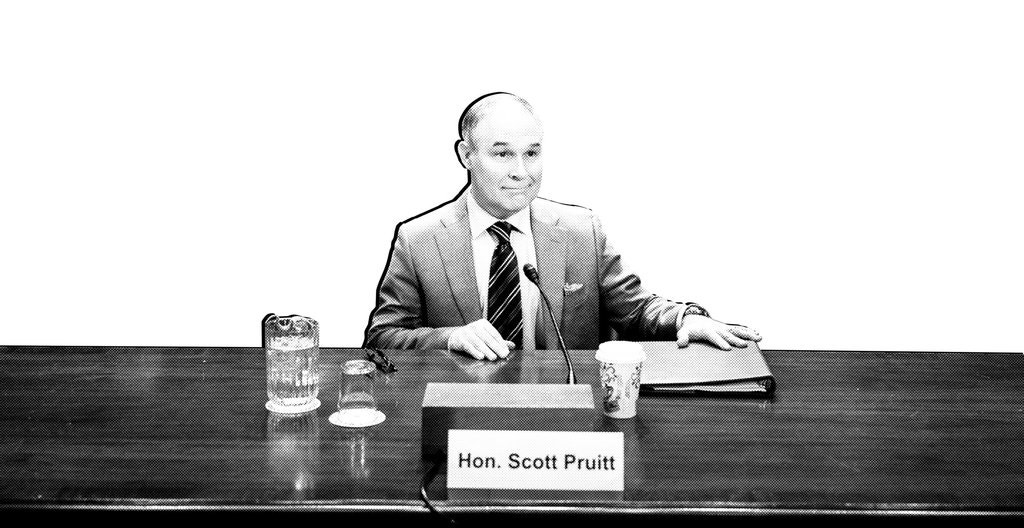 Scott Pruitt is facing 13 federal inquiries into his spending and management practices as administrator of the Environmental Protection Agency.

The subjects of the investigations include Mr. Pruitt’s first-class travel expenses, the installation of a $43,000 soundproof phone booth in his office, and his rental of a $50-a-night condo from the wife of a lobbyist with business before the agency. The negative headlines have continued well into Mr. Pruitt’s second year on the job, though he continues to enjoy the support of President Trump.

Here is a guide to Mr. Pruitt’s actions that are under investigation. (Because some investigations cover several topics, the numbers listed here add up to more than 13.)

The E.P.A. has acknowledged that Mr. Pruitt paid $50 per night last year to live in a Washington condo co-owned by the wife of an energy lobbyist who has had business in front of the agency.

The E.P.A.’s inspector general, which is an independent investigating unit within the agency, and the House Oversight Committee are looking into those living arrangements.

Initially, the E.P.A. produced a memo from the agency’s ethics office saying that the arrangement did not violate federal gift rules because the rate was within “reasonable market value.” However, the ethics office later walked back that assessment with a new memo saying that its staff did not have all the facts before issuing its ethics clearance.

But federal lobbying disclosures show that Mr. Hart did seek assistance from the agency in 2017​, during the period when Mr. Pruitt was renting from Mr. Hart’s wife. ​Mr. Hart had approached the E.P.A. on behalf of the philanthropic arm of Smithfield Foods regarding a program to restore the Chesapeake Bay.

The Government Accountability Office, the congressional watchdog, has already ruled that Mr. Pruitt’s purchase of a $43,000 secure phone booth broke the law because the E.P.A. is required to inform Congress of spending that exceeds a $5,000 limit for office refurnishing, but in this case did not.

Auditors also found that the agency violated the Antideficiency Act, which is designed to prevent unbudgeted spending.

But the inquiries aren’t over. Congressional Democrats have charged that Mr. Pruitt was never authorized to have the phone booth in the first place. They also noted the E.P.A. already has two other areas, known as Sensitive Compartmented Information Facilities, for receiving classified information. The White House Office of Management and Budget said it was also looking into the phone booth expense.

Mr. Pruitt, testifying to a Senate committee in May, said there had not been a legal process at the agency to inform Congress of the office spending, and that he had since instituted one.

Mr. Pruitt’s 24-hour security detail of at least 20 people is more than three times as large as ones for previous E.P.A. administrators. Agency officials have confirmed that the E.P.A. spent about $3.5 million in taxpayer money on salary, overtime and travel expenses for the security team during Mr. Pruitt’s first year in office. That is nearly double what his predecessors spent each year on average.

Three inspector general investigations have been launched into Mr. Pruitt’s security expenses. In addition, there is a House Oversight Committee investigation.

The newest allegations being taken up by investigators are whether Mr. Pruitt improperly used his security detail for personal travel to Disneyland and to a Rose Bowl game, as well as other destinations. Senator Sheldon Whitehouse, a Rhode Island Democrat, told the E.P.A. inspector general that he had been made aware of the trips “after obtaining six weeks of schedules and other documents” that detailed the travel.

Among other things, investigators are examining the role that Pasquale Perrotta, who headed Mr. Pruitt’s security until May, played in agency spending. Mr. Perrotta, who is widely known as Nino, has not responded to requests for comment. Investigators are also looking into E.P.A. purchases of thousands of dollars in bulletproof vests and weapons.

The E.P.A.’s inspector general is looking into Mr. Pruitt’s frequent travel home to Oklahoma last year at taxpayer expense; his use of private, first-class and military flights; and trips he has taken to Italy and Morocco.

Mr. Pruitt regularly flew first class at taxpayer expense in his first year in office. Records obtained by the Environmental Integrity Project and reviewed by The New York Times showed that two weeks of travel in June 2017 for the administrator and his aides cost taxpayers more than $120,000.

Mr. Pruitt told Congress this year that he had started flying coach.

Lawmakers have argued that the Morocco trip, during which Mr. Pruitt promoted natural gas exports, was inappropriate since the E.P.A. plays no formal role in overseeing gas exports. The trip cost about $40,000, according to agency records, with the flights alone costing $17,000.

The E.P.A. inspector general is investigating the use of a provision of a clean drinking water law to hire ex-lobbyists and give raises to political aides.

Two aides who previously worked for Mr. Pruitt in Oklahoma, Millan Hupp and Sarah Greenwalt, received substantial raises that bypassed the usual White House procedures. They were reappointed with higher salaries under a provision of the Safe Drinking Water Act after the White House did not approve the raises. Mr. Pruitt told Congress he had been unaware of the raises and blocked them after learning about them.

Two Democratic senators have asked the G.A.O. to investigate the raises as well, though that inquiry is pending the full outcome of the inspector general’s report, aides said.

Ms. Hupp was Mr. Pruitt’s scheduling director but essentially served as a personal assistant, helping him search for an apartment and obtain tickets to the Rose Bowl game. She also sought a used mattress for him from the Trump International Hotel. Federal ethics standards prohibit such personal assistance by a subordinate.

Ms. Hupp and Ms. Greenwalt, a senior counsel to the administrator, both resigned in June.

The Office of Special Counsel, an independent federal investigative and prosecutorial agency, is also examining Mr. Pruitt’s personnel practices and allegations that he may have used his office for political purposes, according to people with knowledge of the investigation. Mr. Pruitt, who is known to harbor political ambitions beyond his current post, has met numerous times with Republican political donors, an unusual step for an E.P.A. administrator.

When he took the helm of the E.P.A., it was understood that Mr. Pruitt had two official email accounts: pruitt.scott@epa.gov and adm14pruitt@epa.gov. However, two other email addresses later emerged: sooner7@epa.gov (the mascot of the University of Oklahoma’s sports teams) and esp7@epa.gov (the initials of his full name, Edward Scott Pruitt).

Mr. Wilcox, the E.P.A. spokesman, defended Mr. Pruitt’s use of several addresses as “standard practice.” He said all of Mr. Pruitt’s emails are searched before responding to public records requests.

Both Lisa P. Jackson and Gina McCarthy, E.P.A. administrators who served under President Barack Obama, were also criticized for using more than one email address.

The E.P.A. inspector general has taken up an inquiry into a meeting Mr. Pruitt held with the National Mining Association.

Representative Frank Pallone Jr., the top Democrat on the House Energy and Commerce Committee, requested the investigation after a report that Mr. Pruitt had encouraged the coal mining industry group to urge President Trump to withdraw from the Paris climate change agreement. Critics of the meeting said the discussion violated anti-lobbying laws for government officials.

Both the E.P.A. and the industry group have denied that Mr. Pruitt did anything improper.

Meanwhile, the G.A.O. is investigating Mr. Pallone’s complaint about Mr. Pruitt appearing in a National Cattlemen’s Beef Association video. In the video, produced by the lobbying organization last year, Mr. Pruitt describes his opposition to an Obama-era clean water rule.

Mr. Pallone and others asked auditors to investigate whether the promotional video involved an inappropriate use of taxpayer dollars.

Amid the questions surrounding Mr. Pruitt’s travel and spending decisions, there is one investigation on an entirely different issue: His selection process for members of a science advisory committee.

Specifically, the G.A.O. accepted a request from two Democratic senators to look into the E.P.A.’s dismissal of scientists from agency boards that advise on health and scientific matters. The G.A.O. has said it will look into the role that political appointees at the E.P.A. had in choosing a new roster of advisers, which drew largely from industry and state regulatory bodies rather than university researchers.

In addition to the investigations of Mr. Pruitt’s actions, there are inquiries into other accusations of wrongdoing at the E.P.A.

Mr. Pruitt has faced questions about a number of other actions he has taken at the helm of the E.P.A., but these are not known to be the subjects of any federal inquiries.