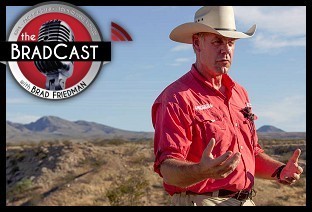 On today’s BradCast: It’s kind of amazing that Trump’s wildly corrupt Interior Dept. Secretary Ryan Zinke is still in office. Now that the EPA’s Scott Pruitt is gone, and Interior just accidentally released a whole bunch of revealing information, maybe Zinke is a bit closer to the exit door. [Audio link to show follows below.]

AARON WEISS, Media Director of the Center for Western Priorities (and host of its Go West, Young Podcast), to explain the “monumental” screw-up last month when the U.S. Department of Interior accidentally released unredacted documents regarding the agency’s deliberations over the unprecedented lifting of federal protections for a huge portion of the Grand Staircase-Escalante monument in Utah.

“We’d always suspected that the outcome was preordained. But this really makes it crystal clear that the fix was in from the beginning,” Weiss tells me, detailing the Department’s subsequent redactions in the documents, revealing what Zinke’s agency hoped the public wouldn’t find out. Namely, that priceless archaeological treasures, native American relics, and a huge tourist and recreational industry benefiting the local economies, are now endangered by the unprecedented closure of nearly half of the Grand Staircase and some 85% of Bears Ears monument (also in Utah). The two monuments are the first to be scaled back in response to Donald Trump’s executive order calling for the review of some 27 national monuments established by previous Presidents.

Weiss explains the how the screw-up came about in response to Freedom of Information Act (FOIA) requests: “Under the Freedom of Information Act, you’re allowed to redact certain things. But then you also have this very broad exception, it’s called the ‘B-5 deliberative process exemption.’ And it’s supposed to be so that officials can discuss policy options candidly. But oftentimes we see that B5 redaction being used as what’s called the ‘because I want to’ redaction. And that’s exactly what happened here, because they wanted to redact stuff that didn’t look good for them, they called that stuff ‘deliberative’.  even though many of these sections were not discussing policy options, they were just basic facts.”

“If you look at what got mistakenly unredacted in just this one document, and think about the tens of thousands of other pages already released and yet to be released, it does raise huge questions about the way they’re abusing that B5 deliberative exemption.”

He goes on to offer an update on the several legal challenges facing the unprecedented closures by the Trump Administration, and how the unredacted revelations underscore Team Trump’s pretty clear aim of aiding their friends in the fossil fuel extraction industry at the expense of all others. Weiss also highlights a newly emerging scandal regarding what appears to be a wildly corrupt development deal in Zinke’s hometown of Whitefish, Montana, involving the Secretary, his wife, and the CEO of oil services giant Halliburton.