By Kirk Mitchell as published in/on the Denver Post 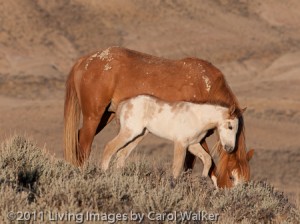 A herd of 800 wild mustangs have been able to cross burned areas of the Boone Draw wildfire to access water tanks set up for them, but advocates worry that the fire consumed grass in an area already suffering from a severe drought.

The horses live on a sage brush and grass plateau in northwest Colorado in the Sandwash Basin Wild Herd Management area on Bureau of Land Management land.

The fire burned 202 acres of the 150,000-acre Sandwash Basin area, but it did burn around the Two Bar Spring, where the wild horses get water, said Hunter Seim, assistant field manager of the BLM’s Little Snake field office.

“The horses are coming and going to the burn area, getting the water they need,” said Maribeth Pecotte, fire spokeswoman. “The horses are pretty mobile. When the fire is coming, they get out of the path pretty fast.”

Seim said he has not heard of any of the horses being burned or killed by the 8,683-acre wildfire about 50 miles west of Craig.

Since July, Wildhorse Warriors has been trucking 7,000 gallons of water daily to Two Bar Spring after the spring dried up during the ongoing severe drought, said group co-founder Cindy Wright.

Wildhorse Warriors has been barred from driving to the spring to replenish the water supply since the Boone Draw wildfire ignited on Thursday, Wright said.

“Any other stress is not going to be good because of the drought,” said Aletha Dove, co-founder of Wildhorse Warriors. “It’s going to make it a harder winter.”

Pocotte said the wild horse management area ideally supports 350 wild horses, but there are about 800 mustangs in the protected area. Dove said the grasslands have been depleted because of the drought and horses have begun eating plants they normally don’t eat until winter. The drought coupled with the fire means there will be less food for the herd this winter, she said.