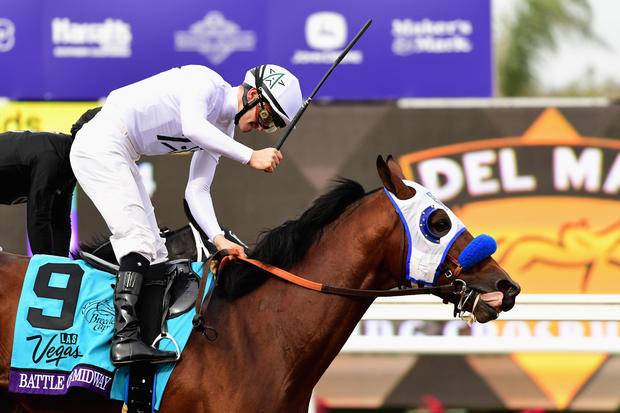 Jockey Flavien Prat (#9) celebrates after riding Battle Of Midway to a win in the Las Vegas Breeder’s Cup Dirt Mile on day one of the 2017 Breeder’s Cup World Championship at Del Mar Race Track on Nov. 3, 2017, in Del Mar, California. Harry How/Getty Images

California’s Santa Anita horse-racing track has been closed for evaluation since Monday in the wake of 19 horse deaths during the past two months. The 19 fatalities during the winter meeting that began Dec. 26 represents a sharp increase compared with seven during the same period last year.

Last Saturday, Breeders’ Cup winner Battle of Midway sustained a fatal injury during a workout. A racing manager for one of the horse’s owners told racing news outlet BloodHorse the 5-year-old’s injuries were too severe to save him and he had to be euthanized.

The track was closed for training on Monday and Tuesday so moisture content and soil consistency below the surface could be checked. The track’s dirt surface was peeled back 5 inches on Tuesday so its base could be thoroughly examined.

The track has had 11 1/2 inches of rain and unusually cold temperatures this month. James Cassidy, who has been a trainer at the track since 1980, told CBS Los Angeles station KCBS-TV the rain may be affecting the track.

“They seal the track when you get heavy rains to keep it from washing out, and then they open it up, and sometimes when they open it up, they get wet spots and so on and so forth, and I think a lot of times that causes injuries,” Cassidy told KCBS-TV. Santa Anita officials brought in Mick Peterson, a University of Kentucky track safety expert, to review the subsurface and surface data.

Peterson already evaluates soil samples from the track on a monthly basis. Santa Anita has formed a committee of California Horse Racing Board commissioner Alex Solis, a veteran trainer and jockey and a member of the track’s management team to evaluate the data and monitor feedback from trainers, jockeys and exercise riders.

Santa Anita was scheduled to reopen for training and racing on Thursday.