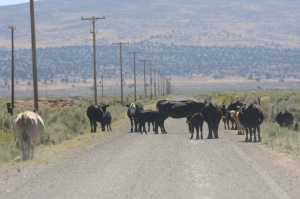 A September 24th flyover survey of the California-Nevada Twin Peaks Herd Management Area by respected wildlife ecologist Craig Downer reveals that only about 265 wild horses remain in this 798,000-acre range in the wake of the recent BLM roundup, which captured 1638 horses.  Fourteen of those horses died in BLM custody or as a direct result of physical injuries or trauma sustained during their capture.

Mr. Downer’s conclusions are in stark contrast to the BLM’s own estimation of the remaining wild horse population at Twin Peaks, which it puts at 793.  As is shown in Mr. Downer’s chart of Supporting Population Data for this HMA, published yesterday by the Equine Welfare Alliance, BLM’s figures are “contradictory to the historic population data and viable reproductive rates.”

During his four-hour aerial reconnaisance over 133.3 miles of the Twin Peaks HMA in late September, Mr. Downer and his pilot actually observed 186 cattle but only seven wild horses, in two bands on the east side of the territory:

“One male-female pair and another group of five, composed of a stallion, three mares, and a colt.  They were located near rocky cliffs and had been grazing on grassy mesas in the higher reaches of the HMA.  They seemed to cling to these remote, rugged redoubts, which perhaps had permitted them to escape the helicopters that had so decimated their numbers.”

Ominously, Mr. Downer did not see even a single burro during his flight, leading to his conclusion that “the population could be dangerously low.”  The BLM reported on September 3rd that it had released only one of the 160 burros it had captured, but Mr. Downer maintains that “all burros should be returned (to the HMA) to ensure a minimal genetically viable population.”

In light of his findings, Mr. Downer is calling for the BLM to restore the wild horse population to 448 horses, a number that it has determined to be the low Appropriate Management Level (AML) for Twin Peaks.  To accomplish this, he is urging the BLM to release 187 wild horses and all of the 159 burros it had captured during the controversial six-week roundup.