Madeleine Pickens Responds To Obama’s BLM Slap In the Face

On behalf of America’s wild horses, American taxpayers, and my Saving America’s Mustang Foundation, I would like to express my deep disappointment in the BLM’s late Friday (January 21st) evening press release announcing its rejection of my proposal to create a eco-sanctuary for wild horses in Nevada.

HOUSTON, (Horseback) – The federal Bureau of Land Management has named a 30 year agency bureaucrat with virtually no wildlife management training to head the delicate Wild Horse and Burro Program. Karla Bird has drawn fire in the past for her support of secret closed door BLM meetings where the press is excluded. 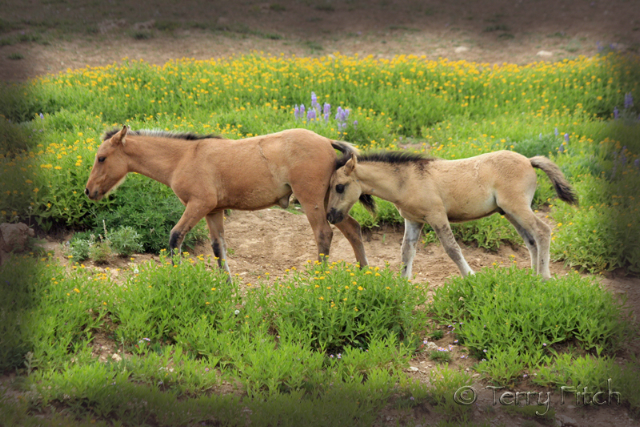 Doing Our Part – And Being Dismissed

In the past few years, on government web sites and in newspaper op-eds, a large portion of the failure for the Wild Horse and Burro Program was laid on the overwhelming populations of wild equines on the ranges and in holding, then at the feet of the Public, for lackluster performances in adopting thousands of animals removed in the face of a poor economy. Yet, according to information published by the Bureau of Land Management, the Public has participated, to the best of it’s ability, even in the leanest years, 2007 – 2009.

A tall, charcoal maned gray stallion living in Twin Peaks has, through no intentional actions on his part, accrued a small fan base.

He is stunning, though years of defending his family and his territory have left his black skin visibly scarred, a common testament to a fiercely protective nature. First observed during a ‘mixer’, a Wild Equine version of speed dating, he pawed the ground, trotting, snorting, kicking up dust in a frank display of masculinity. Middle age and hard living has begun to moderately effect his body, leaving him angular, in contrast to the inherent roundness of a younger, untested stallion. Still, he exudes a powerful appeal in his direct gaze and commanding stance, an assurance that he is more than capable of taking care of what is his. And in his small realm, he is undisputed Lord over all he surveys. In Wild Horse society, little credence is given to perceived perfection; he wooed and won many mares. His mares chose him for his competence as protector and provider, for his experience on the range and likely, for the hardiness & vigor sure to be handed down to his offspring.

Washington, DC (January 21, 2011) . . . As Congress grapples with federal budget shortages, a group of prominent environmental, horse advocacy and humane organizations has joined forces to urge the U.S. Department of the Interior’s Bureau of Land Management (BLM) to postpone a large-scale wild horse roundup scheduled to begin next week in the Antelope Complex, a 1.3 million acre public lands area in northeastern Nevada.