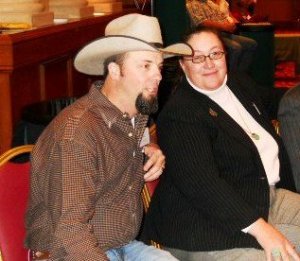 Chicago (EWA) -United Horsemen (UH), a 501c3 non-profit organization that promotes horse slaughter, is taking its fight against the Humane Society of the United States (HSUS) to a new extreme. Not only does this group oppose every piece of legislation that benefits the welfare of horses but tries to garner support with bogus scare tactics.

The latest attack, made under the guise of a property rights issue, is against a proposed ban on “horse tripping” in Nevada. Horse tripping is a deadly and sadistic event which has found its way into the US from third world “Charro” rodeos and involves roping the legs of a running horse. The event commonly causes fatal injuries or permanent lameness to the animal.

“They are misleading the public with false information and trying to scare people into opposing the legislation. This is not an attack on rodeos or a first step to anything. It is a bill designed to end the cruel, dangerous treatment of horses as was the ban on horse soring.” stated Vicki Tobin of the Equine Welfare Alliance (EWA).

In its latest email to its supporters, UH provides a list of invalid talking points that are an insult to the public’s intelligence and a disservice to American rodeos. The group claims that the Charro Rodeo Association voluntary banned horse tripping in 1995 when in fact, they were forced to do so by a 1994 law, AB 49x – a law that was not spearheaded by the HSUS.

Similar claims of HSUS or PETA involvement are frequently made by this group on animal welfare issues when local organizations and equine advocates spearheaded the initiatives.

When Oregon tried to pass similar legislation earlier this year, the group claimed the law would weaken existing laws and although that is false, they are making the same claims for Nevada.

EWA calls on Nevada residents to support the legislation to ban horse tripping to ensure this cruel practice is never tolerated.