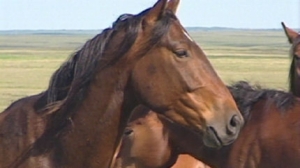 For the first time, the Calgary Stampede is acknowledging its unwanted rodeo horses are sent to an Alberta slaughterhouse for meat.

Stampede officials say the slaughterhouse in Fort Macleod is a destination of last resort for a very few number of the male horses that can’t be trained to buck.

“The selection would be in the order of 20 horses a year that wouldn’t be suitable for something else and would have to go this route,” says Dr. Greg Evans, a Stampede veterinarian.

The female horses that aren’t suitable for sport can be put into the Stampede ranch’s breeding program.

The Calgary Humane Society, which works with the Stampede on animal welfare, says there ought to be a better option.

“We adamantly oppose this practice. And we would hope, perhaps, the Stampede would look at other options. There are horse rescues in Alberta that I’m sure would help with animals no longer needed,” says Christy Thompson, from the Calgary Humane Society.

“Basically, because they’re bred to buck, they’re semi-feral so they’re wilder than the average horse and a lot of them it’s a temperament problem so they’re not going to be comfortable in confinement of any kind,” says Dr. Evans.