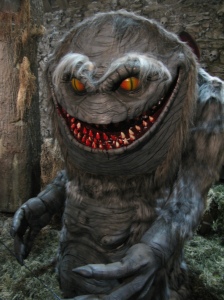 Spew as a youngster

On a small, lonely asteroid far away an evil abomination leans towards a glowing computer screen, drools on the keyboard and hits the enter button launching a malicious and fictitious collection of lies, opinion, conjecture and hateful words across the galaxy in an attempt to subvert truth, fact and science while influencing the minds of the weak and the unwary.

The name of this purveyor of filth and fraud is none other than Spew Walrus, a renegade part-time poltico and gorse* murderer from the western galaxy on the run from reality and the agents of the Sanity Corps who sought to capture and treat the blood thirsty gorse murderer before anymore companion beings fell victim to her lazer powered slaughter slicer.

Planetary legend has it that Spew was female, although never verified, and had been hatched on a relatively unknown asteroid called Ascetic.  There she nested until time to fledge with her siblings only to remain in the nest, never to budge, never to socialize and together with her fellow offspring, never to gain a grasp of the big picture of the universe as a whole and in so doing allowed the dark force to seep in and fill the cracks in her wretched and starving soul.

Spew, in her early years, was once injured by a young gorse who was terrified when the bloated embodiment of evil crawled upon its back and demanded obedience; the gorse fled and the engorged tick of all sins crashed to Ascetic’s surface saved only by the prolific layers of self-indulgent blubber and a mild gravitational pull.  From that day forward, Spew cultivated a festering hatred for the heavenly gorse and in the dark of the night; she would stalk the spiritual creature and slay any she came upon.

But single-handedly killing the light of sentient life was not enough for the deranged slaughterer, neigh, she wanted more blood and to increase her gory high she needed to enlist the aid of the uneducated, the unenlightened and the mindless minions that lurked just on the edge of the galactic fringe; they were an easy target.

She first attracted the interplanetary vermin with bright shiny lights and strobes as it would pull them in out of the darkness like moths to a flame.  From asteroid to planet she would flash her crimson strobes and broadcast sadistic poetry so evil and dark that all who walked in the light would flee for sanity while the unclean would wallow in her empty and slimy words.  She gave them her poison drink of blood-lust and they clung to her every word.

“Killing is not enough”, she whispered, “we must butcher the gorse and feed on his flesh so as to have eternal life and forever be bonded in our pact of blood born brotherhood.  The gorse must die and we will live, that is the essence of life and that is how we shall live.”

The handful of inarticulate followers could only grunt, belch and pound their fists on the ground as they knew not how to form words for communication but one walked forward and approached the bloated killer.

Hunched over and dragging his knuckles on the ground he averted his eyes from Spew’s and spoke softly as he nervously scribbled a doodle in the dust.

“I am Doink da Wreck, commander of the much feared Doinkette Death Squad”, he said as he turned to point at a knot of inhumanity huddled in the back of the dark, dank cave.

“I know the gorse, I have tasted the forbidden flesh and the burning in my gut has never let up” he moaned, “We will follow, we will kill, we will butcher and then we will feast.  You are the leader and we follow you, Spew of Ascetic.”

And with that he gave a sign by shoving a finger up his nose and gesturing to his group who promptly snapped to attention and all four marched single file through the unclean to stand beside their master.

“Let’s go then” gloated Spew as she spun and slipped on her overburdened heel and the groaning band of misfits and knuckle-draggers limped out of the crypt amongst the sound of slobbering, groans and belching…the gorse killing machine was on the move.

*called Gorse because early discoverer was missing right index finger and could only reach the G on the keyboard.

Categories: Horse Slaughter, The Force of the Horse