Courtesy of the Mesquite Citizen Journal

U.S. District Court Judge Howard McKibben denied a motion to enjoin the use of a helicopter… 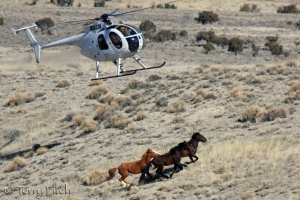 The BLM will continue its emergency gather of wild horses in the southern portion of the Jackson Mountains Herd Management Area (HMA) following a court ruling Wednesday.

U.S. District Court Judge Howard McKibben denied a motion to enjoin the use of a helicopter to conduct the emergency gather that is currently underway in the southern portion of the HMA, but enjoined the agency from gathering excess wild horses from the non-emergency areas of the HMA by helicopter before July 1

“The Court recognized that emergency conditions in the southern area of the HMA required prompt action by the BLM,” said Gene Seidlitz, BLM Winnemucca District Manager. “To not take emergency action to gather excess horses to alleviate the distress of the wild horses as they became thinner and weaker by the day was unacceptable.”

“The emergency gather of the southern portion of the Jackson Mountain HMA continues to occur in a safe and humane manner,” said Seidlitz.

The BLM has gathered 368 wild horses since the emergency gather began on June 8.

The BLM estimates it may finish the emergency portion of the gather within the next 5 to 7 days. No helicopter gather operations will be conducted in the non-emergency areas of the HMA before July 1.