By Kathleen Parker of the WASHINGTON POST WRITERS GROUP 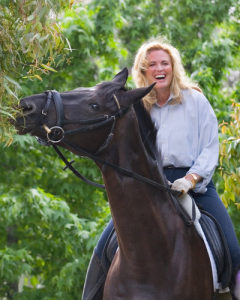 The punch line is at least as old as the eldest baby boomer: “I didn’t get a pony.”

Here’s Jerry Seinfeld: “I hated those kids (who had ponies). In fact, I hate anyone that ever had a pony when they were growing up.”

Why is this funny? Because we all know that, for the most part, kids who had ponies were the rich kids. The lucky ones. Nearly every child wants a pony at some point and so we all relate to Seinfeld’s “hate.” We don’t really hate them, of course, but we do envy them.

It is but a short canter from hating pony people to despising the horse crowd. And this is because people who own fancy horses — thoroughbreds or heaven forbid Olympic horses — are very, very rich.

Thus, Ann Romney recently became a target of ridicule when it was revealed that she co-owns an Olympian horse that will compete in dressage, a sport she apparently enjoys. Dressage, sometimes called “horse ballet,” is the “highest expression of horse training,” according to the International Federation for Equestrian Sports.

Dressage and horseback riding in general offer other rewards, including therapy for people who suffer maladies from physical disabilities to emotional imbalances. This should not be surprising given the millennia-long relationship between humankind and the horse that transcends mere transportation.

Forget Donner and Blitzen. Give me Trigger, Fury and Flicka.

For Ann Romney, riding has been helpful in dealing with her multiple sclerosis. Indeed, horseback riding is a commonly recommended activity for MS sufferers. Because the natural walking gait of the horse is similar to a human’s, riding helps restore balance, coordination and posture, all of which can be affected by the disease’s assault on the spine and central nervous system.

Why, then, have some seen fit to ridicule Ann Romney’s choice of activities? Stephen Colbert can be forgiven his fun with the news, which focused on dressage as the not-so-common-man’s sport. But others have been less funny. Leading the charge on the political side has been MSNBC’s Lawrence O’Donnell, who, while insisting that he wasn’t commenting on Romney’s MS, pointed out that the Romneys treat the horse as a business rather than a health expense.

Horses that compete and breed at the Olympic level typically are business investments, as O’Donnell surely knows. But the talking point must be made — and made and made — that the Romneys aren’t like the rest of us working stiffs. They have big ol’ fancy cars and horses and stuff. And they make lots of money, too. (Oh, and by the way, television anchors do rather well. What’s with the guilt?)

And why this war on success? People who are struggling through rough economic times didn’t suddenly become stupid and surely most see through this absurd, sustained attack on the Romneys.

Mitt Romney’s opponents seem to be aghast that he has made money for investors, though they studiously ignore other greed-less facts: He never took a dime in salary for heading the Olympics in Salt Lake City nor as governor of Massachusetts, to mention a couple.

The issue of Ann Romney’s horse is yet more ideological nonsense from the left, intended to portray Republicans generally and the Romneys specifically as enemies of The People. Riding horses is framed as just one more example of how out of touch the Romneys are with everyday Americans, though Democrats didn’t seem to mind that Jackie Kennedy was an avid horsewoman.

Should Ann Romney become first lady, perhaps she can promote the therapeutic benefits of horseback riding and encourage a culture that funnels the countless unwanted or retired horses to riding farms where emotionally or physically distressed people can enjoy the special communion between human and horse.

It would a better use of these noble animals than as circus or zoo meat, which is how so many wind up. Maybe she could even arrange to get O’Donnell his own pony.