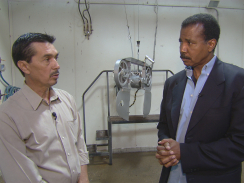 ALBUQUERQUE, N.M. — A New Mexico meat company that wants to resume domestic horse slaughter for food is suing the federal government, alleging inaction on its application was driven by emotional political debates and has cost it hundreds of thousands of dollars.

Valley Meat Co. is seeking to force the U.S. Department of Agriculture to resume inspections necessary to open what would be the nation’s first new horse slaughterhouse in more than five years.

The company and its owner, Rick de los Santos, have also sued the Humane Society of the United States, Front Range Equine Rescue, and Animal Protection of New Mexico, accusing the organizations of defamation during a yearlong dispute that has reignited debate over the humane treatment of horses and how best to control the nation’s exploding equine population.

Perhaps the most divisive question is whether the noble, iconic animals that played a key role in the settling of much of America are livestock or pets.

The USDA declined comment this week on the pending litigation. The agency has until January to respond to the suit filed in federal court in late October.

Bruce Wagman, an attorney for Front Range Equine, called the lawsuit “completely false and frivolous,” and said the group did nothing wrong.

“We aren’t even sure what it says,” he added…continued