Despite rumors, the Budweiser Clydesdales “will” appear in a Super Bowl commercial this year

Story By: Chris Chase as published in USA Today

“The story this morning may have left a wrong impression…” 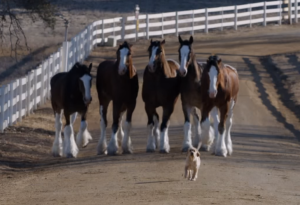 After a Monday morning story in the Wall Street Journal detailed a new marketing strategy for Budweiser that will focus more on “Jay Z and zombies” than the iconic American images normally associated with the brand, there was much worry that the company’s iconic Clydesdales would fade from the Super Bowl advertising landscape they’ve been a part of since 1986.

But fear not, lovers of the famed horses. Though a younger vibe will indeed be prominent in Anheuser-Busch advertisements in the future, the Clydesdales will continue to be featured in Super Bowl advertising in February.

“The story this morning may have left a wrong impression – the Budweiser Clydesdales will, in fact, be featured in next year’s Super Bowl advertising and are also a part of upcoming holiday responsible drinking advertising,” Anheuser-Busch said in a statement.

The company’s 2014 spot “Puppy Love,” embedded above, which featured a Clydesdale chasing after a departed canine friend, was the runaway winner of USA TODAY’s Super Bowl Ad Meter.

Another Clydesdale-inspired spot was named the winner in 2013.