Victoria Racimo talks about film “One Day” (about Our Mims) on Wild Horse & Burro Radio (Wednesday, 11/4/15)

Listen to the archived show (HERE!)

This is a 1 hour show. It will be archived so you can listen to it anytime.

Our guest tonight is Victoria Racimo, director of One Day, a film chronicling the life of racing champion Our Mims and the Thoroughbred retirement sanctuary that bears her name.  This film is an Official Selection in the upcoming Equus Film Festival in New York City, Nov. 20-22.  This film was previewed at the American Equine Summit at the Equine Advocates sanctuary, and there wasn’t a dry eye in the house.  The editor and executive producer is TanNa Young, coordinating producer on the CBS hit series, “The Good Wife.”

Produced by Palomino Entertainment Group, One Day wove the career and subsequent life of 1977 Champion 3-year-old filly Our Mims, with that of Our Mims Thoroughbred Retirement Haven founder Jeanne Mirabito.  Maribito fell in love with the race filly after watching her racing on television, and made a “cosmic claim” on the filly, vowing that one day she would own her.

Twenty-one years later, in the back field of a cattle farm that Mirabito was working on, the two were brought together and formed a bond that eventually saw Mirabito owning the mare and starting a retirement sanctuary for broodmares and the occasional gelding in Paris, Kentucky. 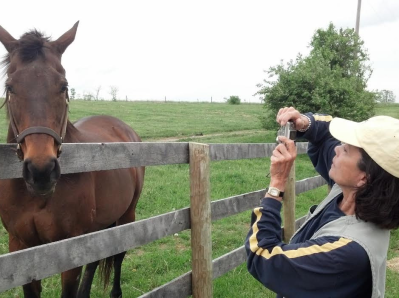 Seasoned actress and filmmaker Victoria Racimo conceived and directed the film about a race mare who gets her due.

Director Racimo has an extensive career as actress, writer, and director.  She produced the film “Casi Casi” and sold it to HBO, co-authored the recently-released book “Blue Moon” with Alicia Keys, and staged two theater scenes for Steven Spielberg in his film “Lincoln.”  She starred opposite Charlton Heston in “The Mountain Men” and in Disney’s “Ernest Goes To Camp,” among many other credits.

DVD copies of One Day can be purchased by going to www.OneDayHorseFilm.com or by emailing OneDayHorseFilm@gmail.com and all proceeds go to Our Mims Retirement Haven.  Donations can also be sent directly to the charity by going to www.OurMims.org or by emailing Cheryl Bellucci, Our Mims Retirement Haven’s director of fundraising and publicity, at cheryl@ourmims.org.

Mirabito and Our Mims formed a strong bond that inspired the film. Photo by Sue Rosenbach

TO LISTEN TO THE MOST RECENT ARCHIVED SHOWS:

2/18/15 – Gail Fagan, spokesperson for Help Alberta’s Wildies (HAW), a group of concerned Canadians who have been fighting to save the remaining wild horses, called “wildies,” from being culled in Alberta, Canada. Listen HERE.

3/4/15 – Carol Walker, Dir. of Field Documentation for Wild Horse Freedom Federation with an update of the Wyoming checkerboard case and the captured wild horses. Listen HERE.

5/13/15 – HOWARD LYMAN, (featured in “Cowspiracy“ and author of “Mad Cowboy” and “No More Bull.”) Lyman stated his opinion of the risk of Mad Cow disease on the Oprah Winfrey Show in 1996, and he, Oprah and Harpo productions were sued by Texas cattlemen. Listen HERE.

8/12/15 – Ginger Kathrens, Founder and Executive Director of The Cloud Foundation. Ginger will be giving us an update on Cloud the Stallion and the wild horses in the Pryor Mountains in Montana. Listen HERE.

9/9/15 – Sinikka Crosland, Exec. Dir. of Canadian Horse Defence Coalition, on horse slaughter in Canada, and the 7,000 horses transported live by air from Canada to Japan each year for slaughter. See video The Truth About Horse Slaughter in Canada (WARNING: this video contains GRAPHIC SCENES). Listen HERE.

10/28/15 – author Terri Farley, who will be talking about her new book, “Wild at Heart: Mustangs and the Young People Fighting to Save Them.” Listen HERE.