BLM Board (Bored) Meets in Nevada: Pack of Liars Minus One

“I didn’t make it, but that does not mean we are not paying attention.

Our sympathies go out to Ginger Kathrens who is stuck sitting amongst a bunch of special interest anti-horse/burro bigots who allegedly advise the Federal government’s most corrupt and vile agency, the BLM.  Horse haters all!

The meeting was being streamed live at (http://www.blm.gov/live/) and conveniently went dead JUST before public comments were about to be made.  Imagine that…but one of our readers did manage to snag the bulk of comments in form of a transcript (https://app.box.com/s/n1kqhbtihpeny8d2kk07q5opdi9wpnyf)

Most troubling was Dean Bolstadt talk where he misrepresented the facts and as usual, lied about the numbers:

Bolstadt is “alluding to” having Congress change the law – i.e. Congress giving $ to kill them.

And that is what he wants his legacy to be, he can almost taste it…he wants them all dead. They all do.

Below is a local news article that fans the flames of destruction for the wild horses and burros and brings to light how serious our fight for the future safety and welfare of the wild ones really is. It’s all hands on deck as the lying continues, today!” ~ R.T. 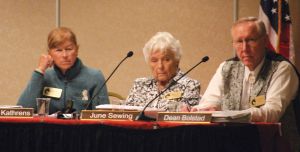 ELKO — Public comments at the National Wild Horse and Burro Advisory Board addressed contraceptive efforts as well as what was described as the disastrous effects of the animals on the rangelands.

“No, folks it’s an emergency today and it will be a disaster tomorrow,” said State Veterinarian Dr. JJ Goicoechea.

He used the example of over 250 horses that were in desperate need of water Thursday, referencing an earlier phone call resulting in the horses receiving both care and water.

Goicoechea furthered the conversation concerning how the issue of wild horse population is truly about the resource.

The spring, surrounding range and the horses will not come back, he said.

“It’s an emergency today and I encourage this board to please ask the director to declare it an emergency,” said Goicoechea, explaining if there is a concern about funding emergency appropriations can be sought to complete the work.

He said both fertility control and the removal of excess horses is necessary. The former is not going to fully alleviate the situation until the appropriate management level is achieved.

Goicoechea also said he wanted to discuss the Bureau of Land Management’s issues with fertility control because of branding problems.

The veterinarian expounded upon the fact the State is willing to work on identification efforts and not keeping the agency from conducting fertility control in that manner.

“Dr. Goicoechea couldn’t have hit it any better on the head. We’ve got a disaster out here on the open range,” said Assemblyman John Ellison. “People should be arrested for the shape these horses are in.”

Ellison also discussed the state of the range, claiming ranchers are being pushed out with the water levels from the drought and more wildland fires are started due to an increased fuel load by taking cows off the land.

“What you need to do is find a place to move these horses,” he said.

He asked the advisory board if something is not done, who would be responsible for the death of the horses?

If the photographic evidence were to be looked at, it would be seen the horses are pushing away cattle and elk from riparian areas, said Ellison, encouraging members to look at different areas around Nevada to get first-hand knowledge.

“With no water and no vegetation out there, this is getting to where it’s critical. Either you can sit here and do nothing and let them die, or make the decision this board needs to make,” he said, discussing how what is being done is not working.

Ellison brought up a point made by many commenters that these are feral horses, not mustangs, with 90 percent of the horses being wild.

Dr. Boyd Spratling restated the cost these animals are having on the resources, such as the potential of an entire generation losing a watershed or habitat.

On behalf of the Nevada Cattlemen’s Association, Spratling said, it will support “any safe manipulation to reduce population growth.”